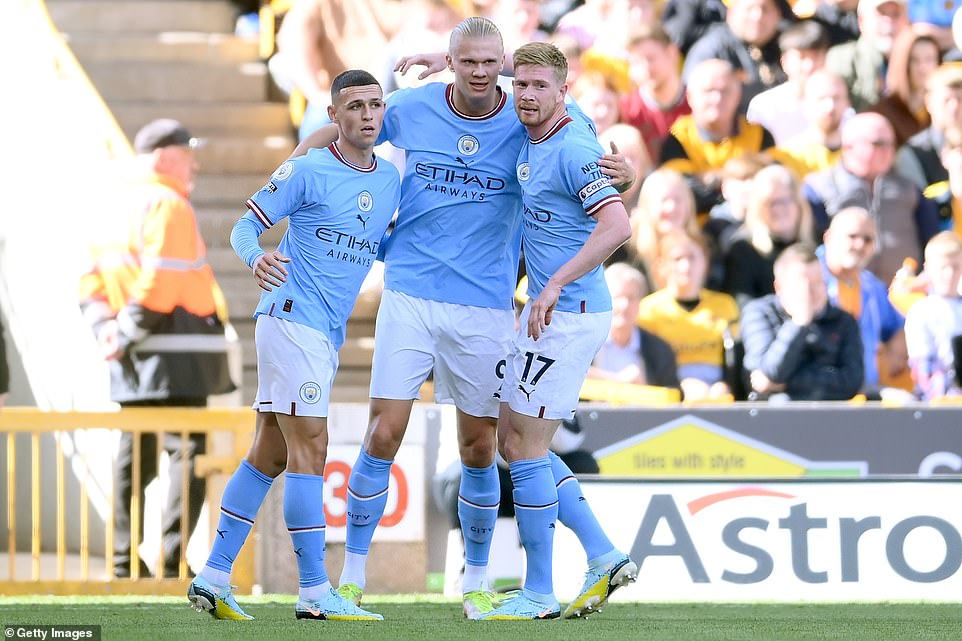 Many years ago, there was an exhibition of football memorabilia at Liverpool Town Hall. The star exhibit was a weathered and worn wooden shield, which was decorated with a series of silver plaques. People queued up to have their picture taken with it because it felt like a precious memento of something that could never, ever be repeated. I still have mine buried in a drawer somewhere.

Each of the silver plaques on that shield represented a goal scored by Dixie Dean in Everton’s 1927-28 season. Dean notched 60 goals in that campaign, a total that for a long time has seemed other-worldly. Since the Second World War, Jimmy Greaves got the closest to matching it when he scored 41 for Chelsea in their 1960-61 season. Early in the Premier League era, Andy Cole and Alan Shearer both managed 34 in a league campaign.

But now we are starting to wonder whether we may have to adjust our horizons. There is a phenomenon amongst us and after Erling Haaland scored his 11th goal in the seven league games of his Manchester City career in his club’s 3-0 victory at Molineux on Saturday, which sent them to the top of the table, all manner of records may be under threat. 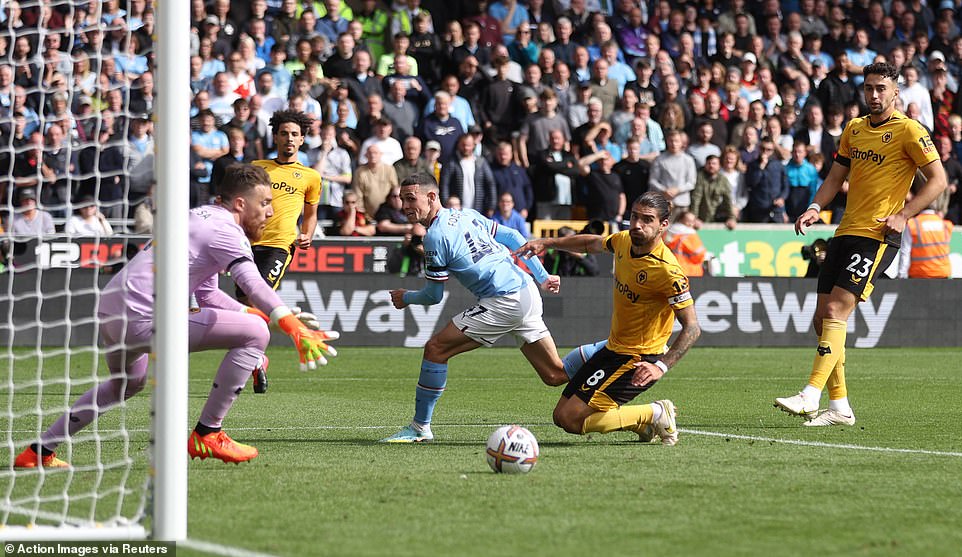 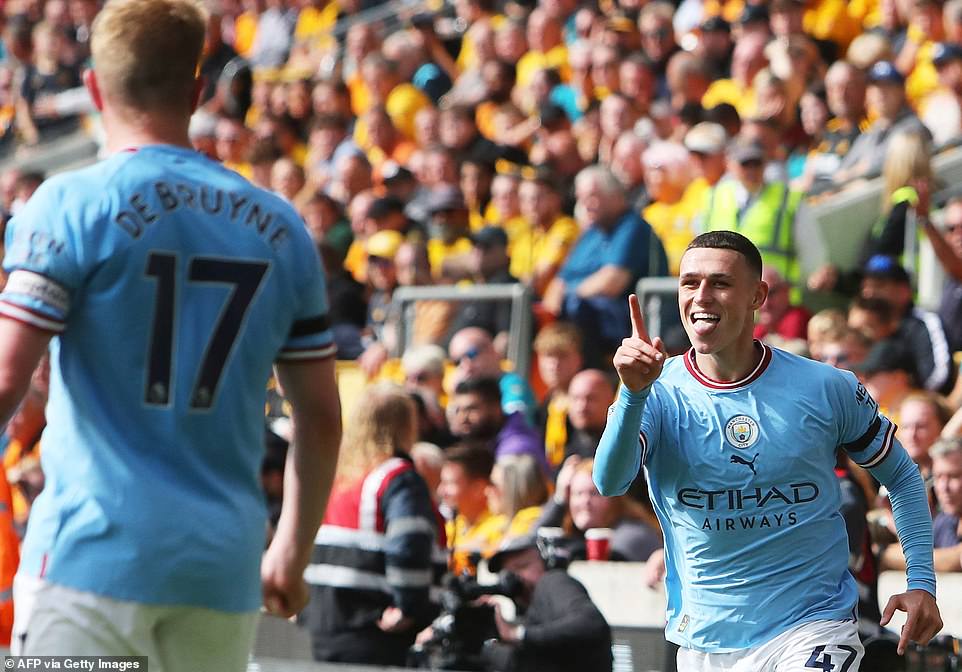 Haaland has scored 100 goals in his last 99 games in all competitions since leaving RB Salzburg in January 2020. At his current rate, he would get close to Dean’s record and even if that must remain highly unlikely, if he stays fit, it seems probable he will eclipse that mark set by Shearer and Cole.

As an aside, Dean only scored 10 goals in his first seven of that 1927-28 season so Haaland is ahead on that metric. Historians will know that soonn after that, Dean scored all five of Everton’s goals against Manchester United. City play United in their next match, on October 2, so that gives Haaland something else to aim for.

What was evident at Molineux and in most of the games City play is that Haaland has the advantage of playing for the dominant team in the Premier League, a team so good that their approach play is often a work of art, a blur of skill and movement and exploitation of space. City will drop back to second if Arsenal win at Brentford on Sunday but it looks more and more likely they will retain their title at a canter. 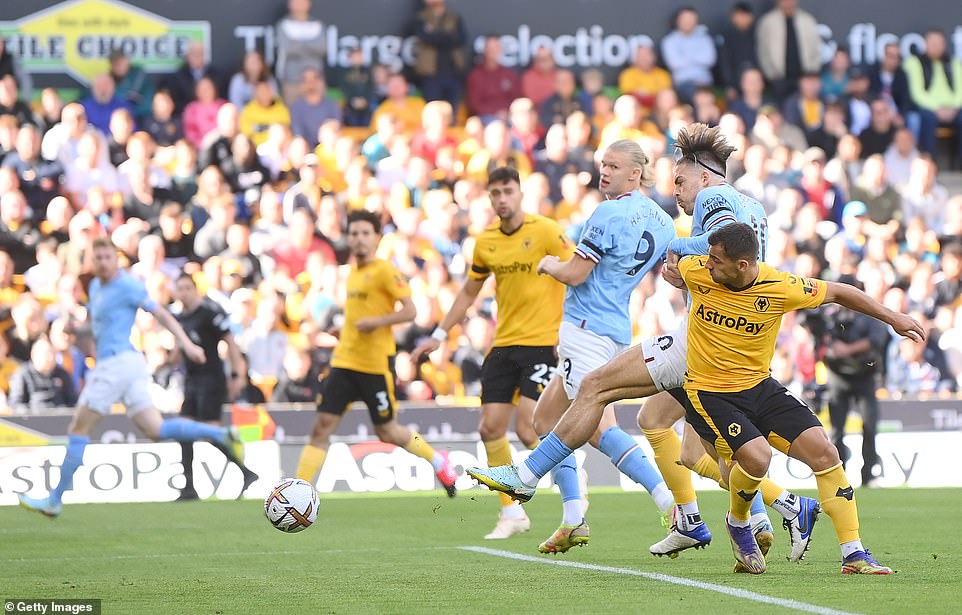 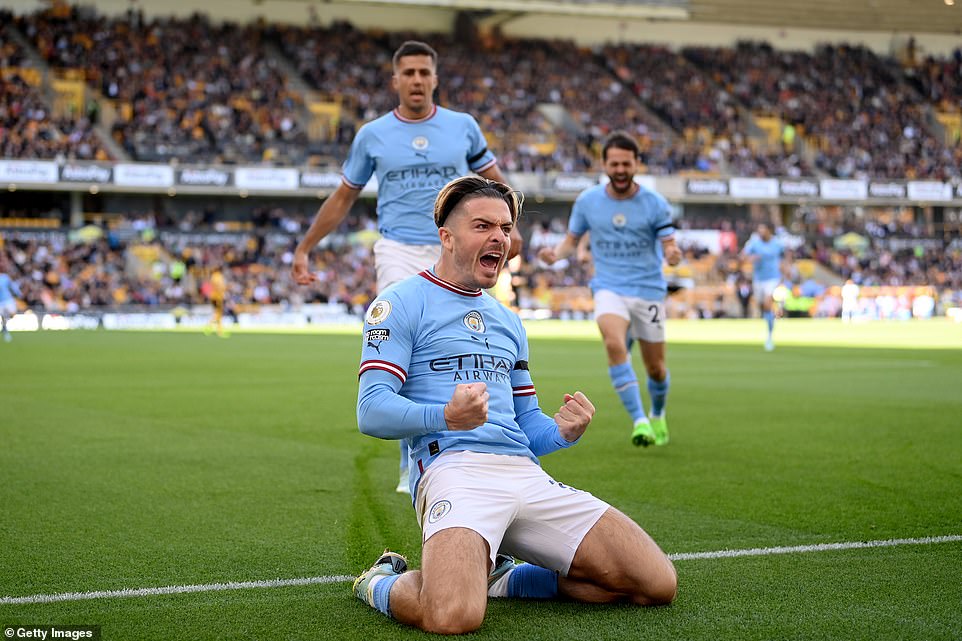 Haaland deserves all the headlines for his relentless goalscoring and if his strike at Molineux was not as spectacular as the flying kung-fu kick goal which won City’s Champions League tie against Borussia Dortmund last week, it was still testament to his instinct for an opening and his surging confidence. Without him, City’s rivals have had a chance. With him leading the attack, the idea of anyone overhauling them seems like a distant prospect.

Haaland is still, in many ways, the icing on the cake. De Bruyne was magnificent again against Wolves, creating two of his side’s goals, constantly prompting his teammates, constantly testing the opposition defence. Jack Grealish, still much maligned, was not far behind him. It was the former Villa player who drew the rash, high first half challenge from Nathan Collins that earned Collins a red card and ended any faint prospect of a Wolves fightback.

Wolves had hoped that the headlines might be made by a centre forward of their own but there was, sadly, no place for Diego Costa in their starting eleven or on the bench. He may indeed be as hungry as the snarling wolves that flanked him during his video introduction to supporters last week but he has not played since he last turned out for Atletico Mineiro nine months ago and even someone as competitive as Costa needs time to get sharp again. 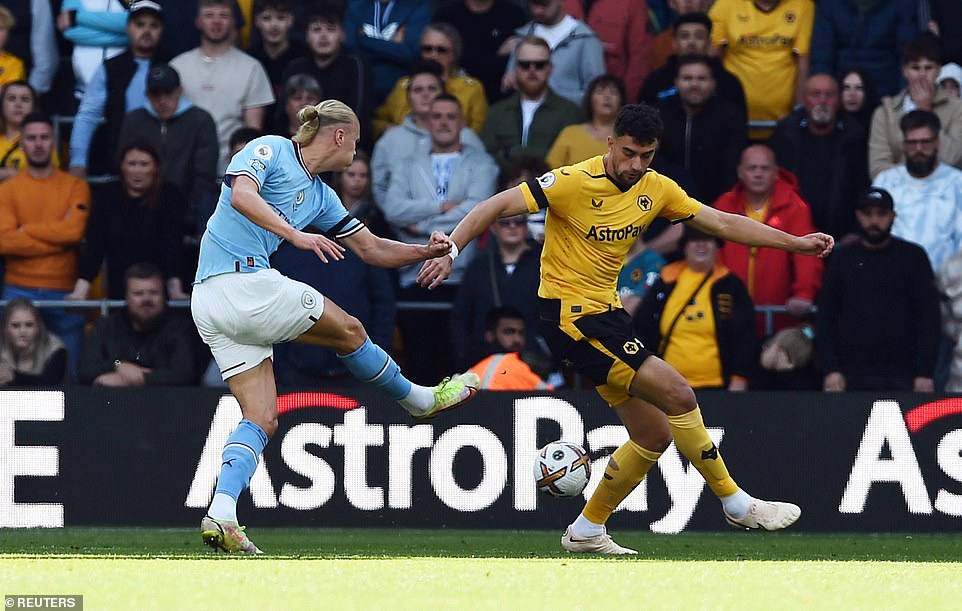 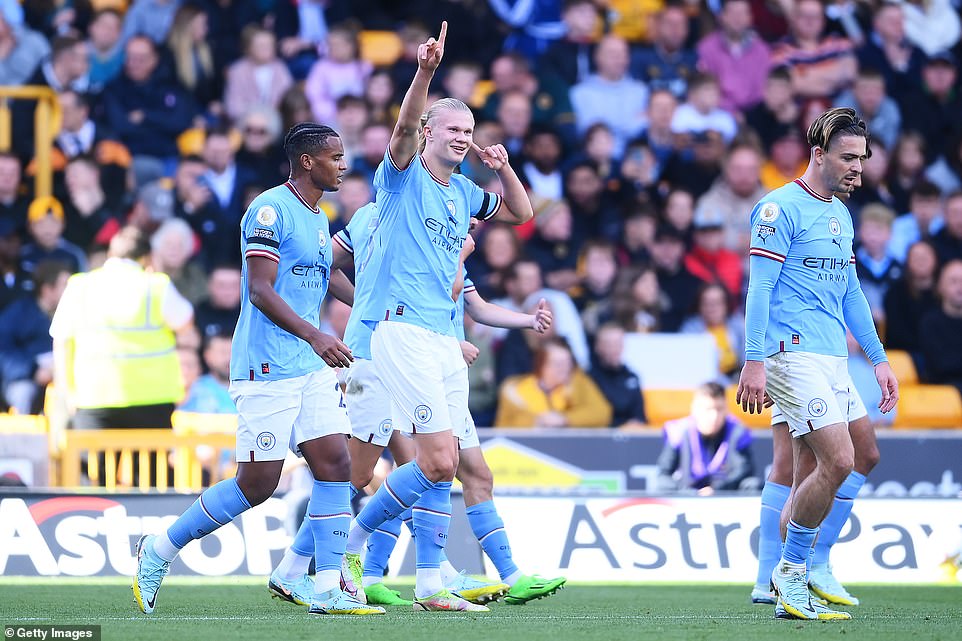 City were ahead in 55 seconds. It was a goal beautifully conceived and expertly executed. De Bruyne played a slick pass out wide to Phil Foden on the right. Foden held the ball up and waited for De Bruyne to skip past him on the overlap. At just the right time and with just the right weight, Foden backheeled the ball into De Bruyne’s path, De Bruyne curled it across the face of goal and Grealish prodded it past Jose Sa from a few yards out.

Wolves tried to hit back. They were not content just to soak up pressure and try to limit the damage. They earned a free kick in a dangerous area but Joao Moutinho’s effort bounced back off the wall. They forced a good chance through Goncalo Guedes but it was well saved by Ederson. They won a couple of corners but they were cleared. Then City scored again.

Haaland had only touched the ball three times when he collected the ball with his back to goal midway inside the Wolves half. He turned and ran at Max Kilman, who has had rave reviews for his performances at centre half this season and was unlucky not to be selected in the England squad last week. 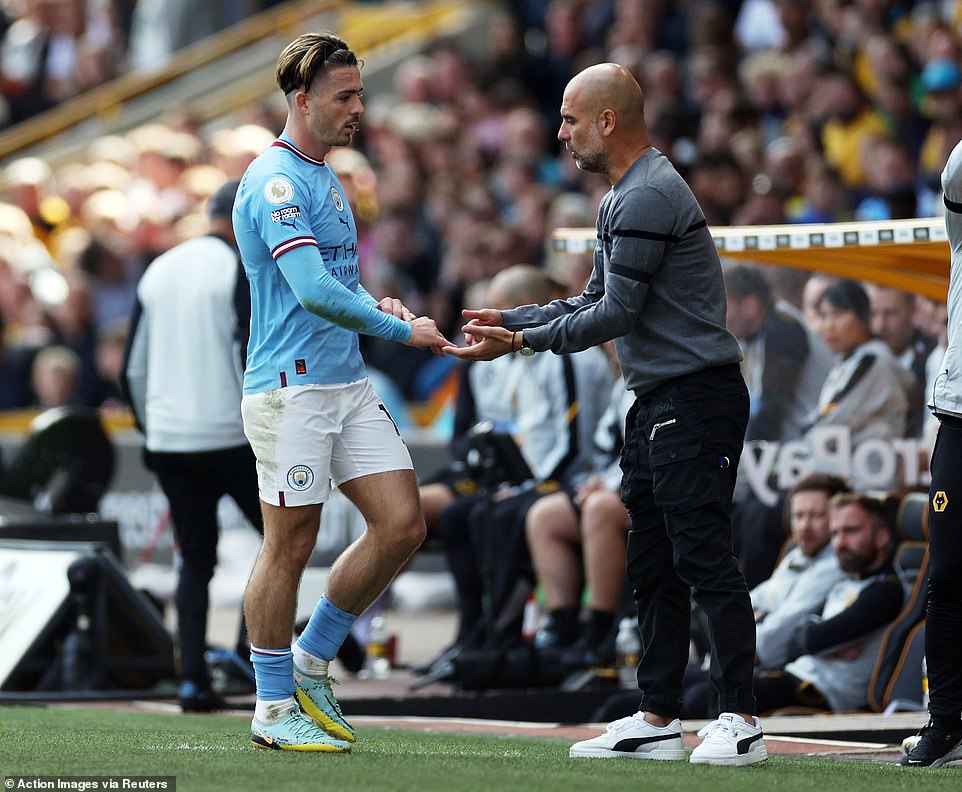 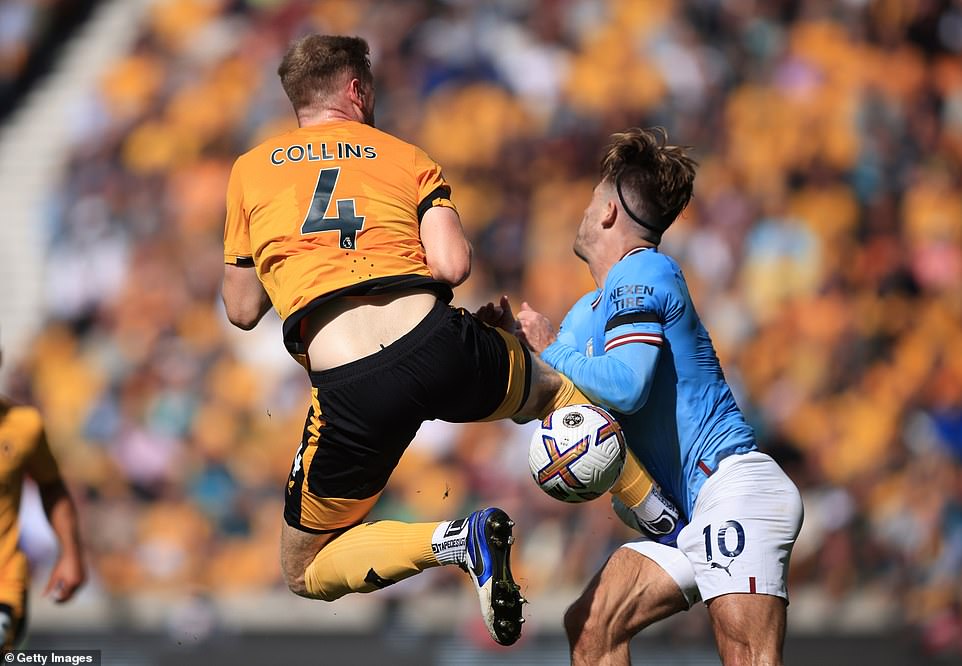 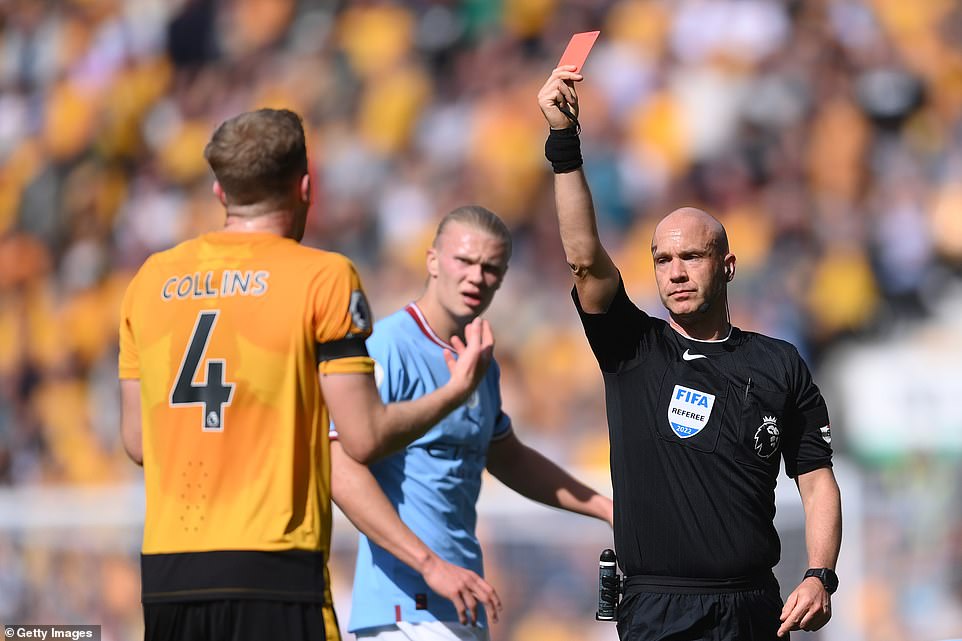 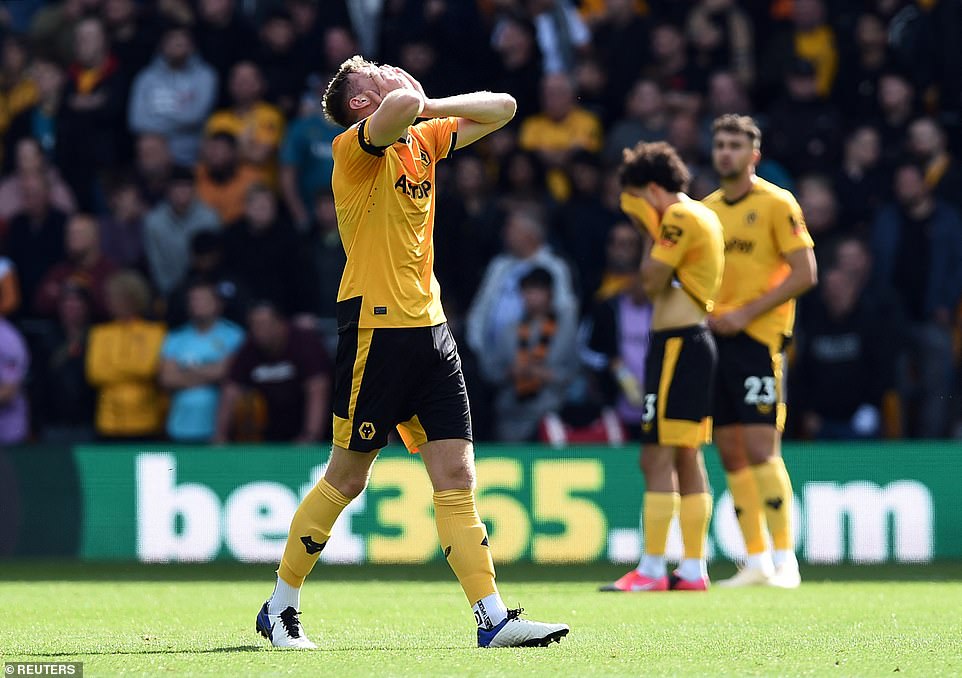 Collins reacts as he leaves the pitch, with the red card leaving his side with a huge mountain to climb at 2-0 down 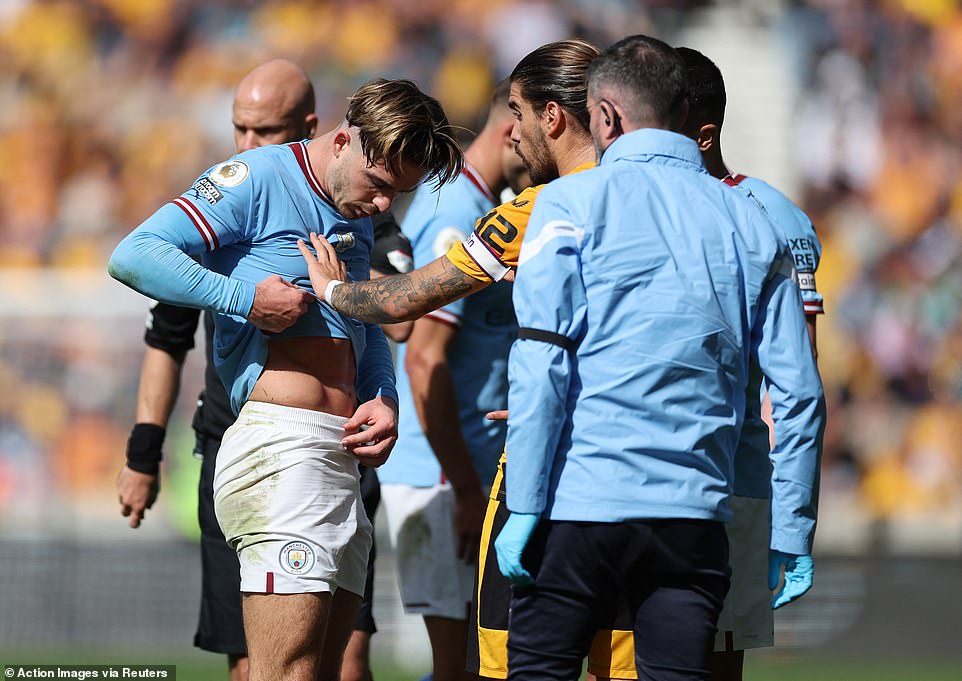 Now, though, Kilman was at sixes and sevens, trying to anticipate what Haaland would do as he ran at him. Haaland got to the edge of the area, pushed the ball on to his right foot and hit a bobbling shot that eluded the dive of Sa. It was his 11th goal in his seventh league game for City and his 14th in all competitions. For the moment at least, he is unstoppable.

Things got worse for Wolves 12 minutes before half time when Joao Cancelo drifted a ball down the left wing for Grealish. Grealish let it bounce and then ran on it but as he tried to take it on, Collins attacked the ball. It bounced high and Collins’ challenge was even higher.

His studs connected with Grealish’s hip and as Grealish collapsed to the ground in agony, referee Anthony Taylor brandished the red card immediately. The challenge was not malicious but it was dangerous. It was hard to argue with the punishment. 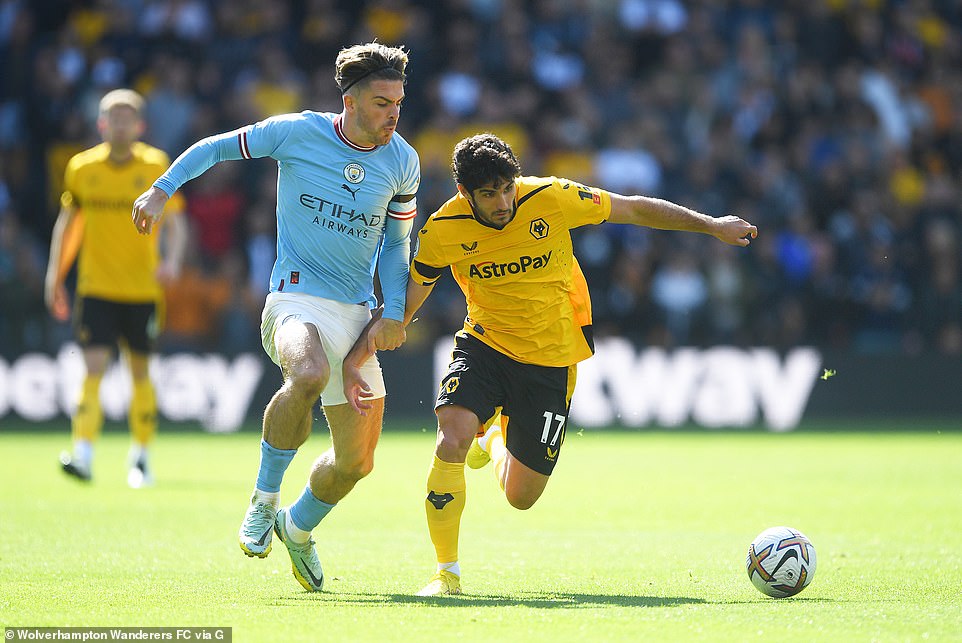 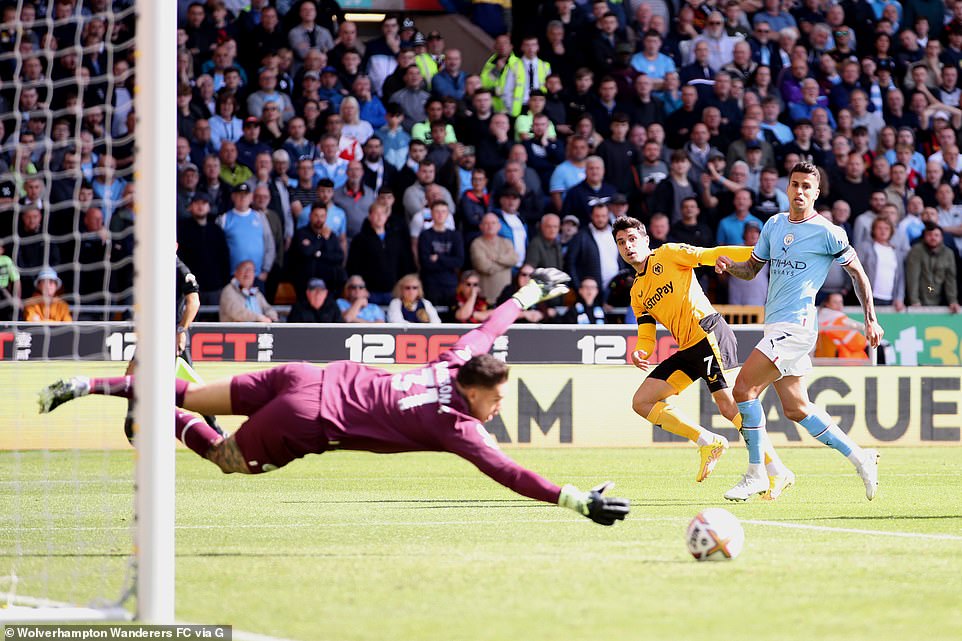 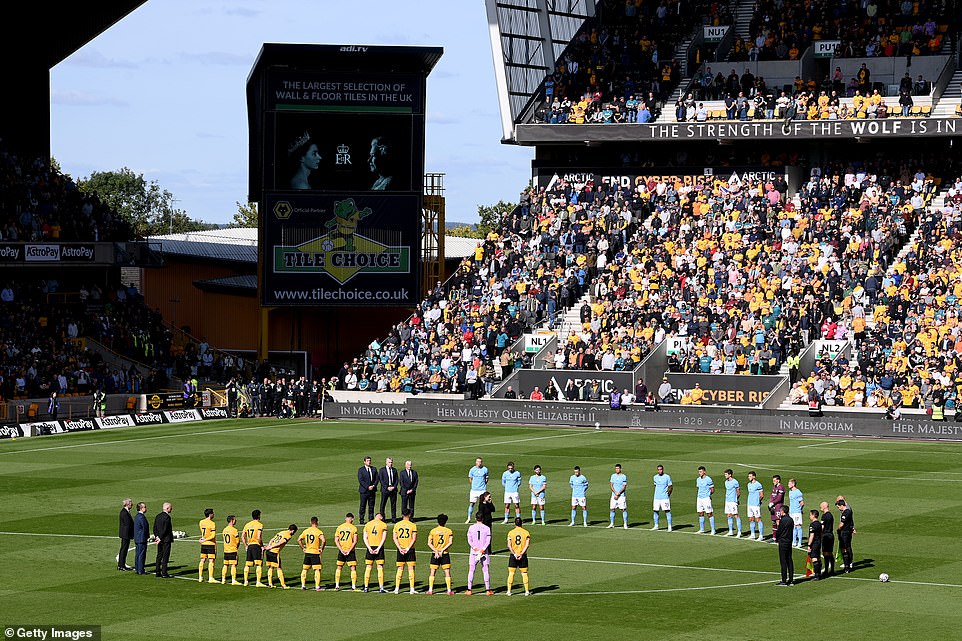 Wolves had a sniff of a chance of forcing their way back into the game after an hour but Guedes sliced his right-foot shot hopelessly wide when the ball was pulled back to him 12 yards out. A few minutes later, City proved again that if you offer them reprieves, they seize them with both hands.

This time, Haaland acted as provider. Fed the ball by De Bruyne, he checked his run and waited for the Belgium playmaker’s overlap. De Bruyne ran on to the ball and drilled it across the box where Foden got to it first and flicked it beyond Sa with a clever flourish of his right boot. If Haaland is now the spearhead of this team, De Bruyne is still its brains.

City could easily have won by more. Haaland could easily have scored more had teammates found him when he had earned space. There is a long way to go and a thousand variations to consider but Haaland is blazing a trail in the Premier League this season. At this rate, Dixie Dean and that worn old shield will be getting a few more mentions in the months ahead.

All the action from Molineux as it happened…