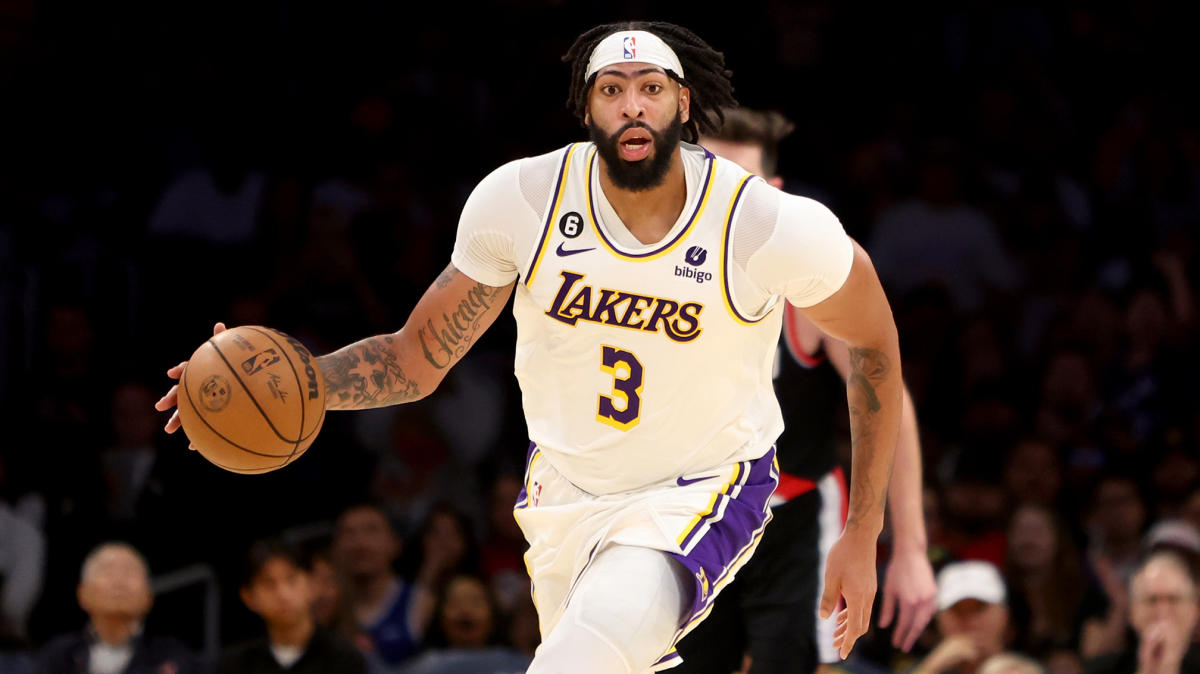 The Week 15 schedule is a little bit different than most. While Friday’s slate is a bit light, with only five games being played, the NBA has gifted us an 11-game Saturday. Maybe the desire to avoid Championship Sunday (of the conference variety) in the NFL has something to do with that, but that’s a conversation for another day. Among the storylines of note heading into Week 15 are the potential return of a star big man and the reigning MVP’s struggles with a nagging hamstring issue.

— Lakers’ Davis could be back by the end of the week

Anthony Davis has been out since December 16 due to a stress injury in his right foot, but a return may be on the horizon. ESPN’s Adrian Wojnarowski reported on January 20 that Davis could be back in action by the end of “next week,” with the Lakers set to begin a five-game road trip on January 28 in Boston. With that being the Lakers’ final game of Week 15, fantasy managers in weekly leagues aren’t going to insert Davis into their lineups. But that game in Boston will one to keep an eye on, and not only because of a potential Davis return.

If he does play, what does that do to Thomas Bryant? Over the last month, Bryant is providing 6th-round value in 9-cat formats, averaging 14.3 points, 9.4 rebounds, 0.7 assists, 0.5 steals, and 0.6 blocks in 26.5 minutes, shooting 61.2% from the field and 83.3% from the foul line. Bryant’s efficiency has made up for the lack of assists and defensive stats, and he’s one of two Lakers providing top-100 value during this stretch (as you likely know, LeBron James is the other). Will Darvin Ham play Bryant and Davis alongside each other, especially with the latter’s preference to play the four instead of the five? And if that does happen, is Patrick Beverley the odd man out in the starting lineup?

Something else to watch with the Lakers in Week 15 is the availability of Lonnie Walker IV, who is now day-to-day after being sidelined since the end of December with left knee tendinitis. Before heading east at the end of the week, the Lakers play a home back-to-back against the Clippers (Tuesday) and Kings (Wednesday).

— Will Denver’s Jokic be sidelined? And if so, for how long?

Two-time MVP Nikola Jokić was held out of the Nuggets’ January 20 game against the Pacers due to tightness in his left hamstring. And at the time of publishing, he was questionable for the January 22 game against the Thunder. Even if the Joker is cleared to play in that game, it’s fair to wonder if we’re looking at a two-game Week 15 for him. Denver plays a road back-to-back against the Pelicans (Tuesday) and Bucks (Wednesday), and they end their week in Philadelphia on Saturday. In the past, DeAndre Jordan was the fill-in when Jokic was sidelined, but that was not the case against the Pacers.

Zeke Nnaji received the starting nod, playing 26 minutes and finishing with seven points, three rebounds, one assist, three steals, one blocked shot, and one 3-pointer. Jordan chipped in with 10 points, two rebounds, three assists, one steal, and one block in 18 minutes off the bench for his part. If Jokic remains sidelined, will Nnaji remain the spot starter, or will the Nuggets’ decision on who fills the void be dictated by the matchup? Either way, he and Jordan will have a shot at providing fantasy value if the Joker cannot return during Week 15.

Rotoworld’s Roundball Stew Podcast: From waiver wire pickups to season-long NBA trends to DFS and random side bets, the crew has you covered. Don’t forget to rate and subscribe wherever you listen to podcasts

Boston’s two-point win in Toronto on January 21 was tough, not only because of the competition. Jayson Tatum (wrist) did not play at all, while Marcus Smart (ankle) and Robert Williams (knee) were injured during the first half and didn’t return after halftime. Boston’s looking at a four-game Week 15 that begins with a Monday/Tuesday back-to-back in Florida (Orlando, then Miami) before closing the week with home games against the Knicks (Thursday) and Lakers (Saturday). With Tatum expected to rejoin the team in Orlando (he didn’t travel to Toronto), that will certainly help if Smart and/or Williams can’t play. But are there any options with low rostered percentages to target?

Grant Willams (22% rostered) certainly fits the mold, especially after he produced a line of 25 points, five rebounds, one assist, one block, and four 3-pointers in 34 minutes off the bench against the Raptors. Even if the Time Lord is good to go on Monday, fantasy managers have to account for that back-to-back, which makes “Batman” an appealing option. As for Smart’s potential absence, Payton Pritchard played 26 minutes off the bench Saturday, finishing with 12 points, two rebounds, two assists, one steal, and four 3-pointers. With Derrick White and Malcolm Brogdon off the board in competitive leagues, Pritchard (1% rostered) is worthy of consideration.

— Hornets embark on life without LaMelo…again

Charlotte lost LaMelo Ball to a sprained left ankle during their January 18 win over the Rockets, the third time this season he’s been sidelined with that issue. He missed the first 13 games after initially spraining his ankle during the preseason, and Ball missed close to a month (11 games) after injuring the ankle again in mid-November. Add in a left wrist injury that he aggravated during that win over the Rockets, and we may be looking at another lengthy absence. And with Charlotte among the league’s worst teams and viewed as a “seller” with the trade deadline a few weeks away, what would the motivation be to put Ball on the court before he’s surely 100%?

The Hornets started Terry Rozier at the point in Saturday’s win over the Hawks, with Gordon Hayward and Jalen McDaniels flanking him on the wings. Rozier (34 points, three rebounds, five assists, four steals, and seven 3-pointers in 39 minutes) went off, but he clearly isn’t a player you’ll find on waiver wires. The same can be said of Hayward, even with his injury-related struggles throughout this season. As for McDaniels, remaining in the starting lineup is a positive for a player who’s rostered in 48% of Yahoo leagues. Dennis Smith Jr. (30% rostered) will figure more prominently in the rotation, and he’ll be a popular “add” with the Hornets playing four games in Week 15.

— Will the Rockets continue to run things through Sengun?

Houston is going through a brutal stretch, with Stephen Silas’ team losing 13 straight games. Add in the foot injury that has sidelined Kevin Porter Jr., and the “light at the end of the tunnel” looks like it’s attached to a locomotive. But there has been a positive: the Rockets are now running much of their offense through Alperen Şengün, who’s been up to the task. Houston’s lone top-100 player in season-long value (9-cat), he’s providing 3rd-round value over the last two weeks. And with the Rockets playing four games in Week 15, beginning Monday against the Timberwolves, Sengun could make a run at the top-50…if Houston continues to play through him.

Porter is still dealing with pain in his foot, and Silas said before the January 21 loss to the Timberwolves that he’ll be out for at least one week. At a minimum, this takes KPJ off the board for three more games, and that January 28 matchup with the Pistons may not be in the cards, either. Sengun has benefitted from Porter’s absence in fantasy, and the same can be said for KJ Martin, who’s still rostered in 21% of Yahoo leagues.

— How many games will managers get out of the Bucks’ Antetokounmpo?

This question is being asked again, as Giannis Antetokounmpo has missed Milwaukee’s last five games. The most recent was a January 21 loss to the Cavaliers, dropping the Bucks to 2-3 during this stretch. Milwaukee does play four games without a back-to-back in Week 15, but will Giannis be healthy enough to return? And if he is, that doesn’t mean the Bucks won’t still look to work in an injury management day. If the answer is no, Bobby Portis, a 9th-round player in 9-cat formats over the last two weeks, gets to remain in the starting lineup. This also impacts Jrue Holiday’s usage, as he’s up to 30% over the last two weeks while providing top-20 value. Holiday’s usage percentage for the season: 26.2. Milwaukee’s also waiting for Khris Middleton (knee) to return, but it’s clear that the priority is to ensure those guys are healthy for the postseason, late-January games be damned.

De’Anthony Melton has been even better than his biggest fans in the fantasy world expected when he was traded to the 76ers on draft night, providing top-50 value in 9-cat formats. For a player with a Yahoo ADP of 120, that’s excellent value. But with Melton’s production taking a dip recently and the 76ers only playing two games in Week 15, will some impatient fantasy managers look to trade him? Melton’s been a 13th-round player in 9-cat formats over the last two weeks, averaging 5.9 points, 3.5 rebounds, 2.3 assists, 1.8 steals, 0.8 blocks, and 1.1 3-pointers in 24.9 minutes, shooting 32.7% from the field.

Those aren’t great numbers, but to move on from Melton because of a two-game week would be shortsighted. Tyrese Maxey’s willingness to move to the bench has kept Melton in the starting lineup, where his defensive prowess is highly valued. And Philadelphia plays four games in Week 16, so even if James Harden (foot) is back for both games in Week 15, Melton is worth holding onto.

The App is Back! Don’t forget to download the Rotoworld app to receive real-time player news and mobile alerts and track your favorite players. Plus, now you can check out articles and player cards. Get it here!