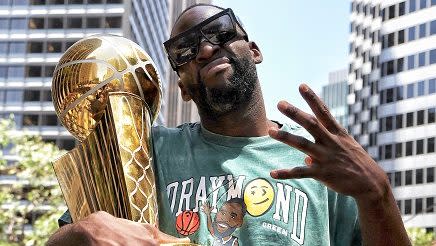 Things are about to get very expensive in Golden State.

Things already were expensive — the Warriors set an NBA record paying more than $350 million in player salaries and luxury tax last season. This season they will have a bill in the same ballpark. But there are limits to what even Joe Lacob and Peter Guber (the Warriors owners) will spend, even with the cash cow that is the new Chase Center filling their bank accounts. Stephen Curry is about to start a no-brainer $215.4 max contract extension, Klay Thompson is at the max, Andrew Wiggins is in the final year of a max and likely gets extended at a slightly lower but still steep price, and Jordan Poole is up for an extension and while not a max guy is a bridge to the future. All that has led to an interesting bit of speculation:

Are the Warriors going to have to break up the band soon? Could Draymond Green be the odd man out?

Green is also extension eligible right now, but Warriors GM Bob Myers denied he is out, talking to Tim Kawakami of The Athletic.

“No, no, I would definitely, unequivocally say (he’s) not a guy we look at and say he’s not going to be around,” Myers said. “Now, at some point, decisions are going to have to be made. But as far as his importance to this organization and what he’s done, we’re going to do everything we can to keep him in the fold…

“Draymond, certainly it’s obvious to anybody what he’s done for us. I could never sit here and say, ‘Well, he’s not going to be around.’ I can’t even get the words out of my mouth.”

Green is set to make $25.8 million this season and is widely expected to opt-out of the $27.6 million player option he has next season. The Warriors can extend him off that deal for four years, $138.4 million ($34.6 million average a year), a big number for a 32-year-old but also short of what Curry and Thompson will make (they are both above $40 million this season). Green is not the offensive player he was six or seven years ago (7.5 points, 7.3 rebounds, and 7 assists a game last season), but that’s never the end of the floor where he made his money — he was the Defensive Player of the Year frontrunner last season until injuries struck.

There are many questions: Will the Warriors put that max extension on the table? Would Green take it? Does Green think there could be a bigger contract for him as a free agent next summer? Green brings a very specific skill set to the table as a defender and passer, but it’s not a fit for every system, how many teams would step up with a huge offer for him?

The biggest question remains where the Warriors will make cuts? Coming off a title they are wisely bringing the band back together to chase another ring, and they are betting favorites to come out of the West. But with Green, Wiggins, and Poole back in the fold the 2023-24 Warriors could see payroll and taxes jump north of $400 million, a figure even they balk at. Changes have to come from somewhere. It’s something to watch as they sign players to extensions before this season starts, with an eye to the future.

Check out more on the Warriors

See also  Are struggling Mavericks on the clock with Luka Doncic?