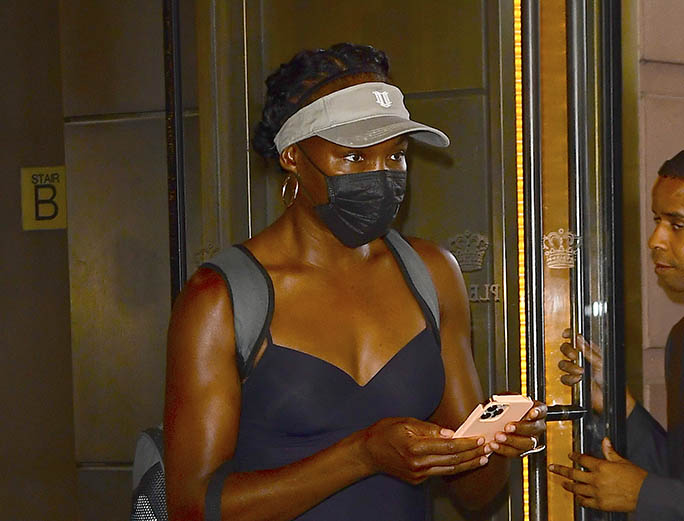 Venus Williams put a sporty twist on a street style ensemble while out in New York City. The tennis champion’s appearance comes ahead of her highly anticipated match against her sister Serena Williams during the 2022 U.S. Open. This will be Serena’s last time playing in the tennis tournament as she announced her impending retirement from the sport in Vogue’s September issue.

Venus looked cool and casual while out in the Big Apple. The seven-time Grand Slam winner hit the pavement in a dark blue bodysuit. The top had a plunging sweetheart neckline and thin spaghetti straps.

To combat the warm summer temperatures, Venus teamed the piece with a charcoal denim mini skirt. The tiny garment had a fitted waistband and distressed detailing along the hem. The tennis star accessorized the look with a light grey visor hat and small hoop earrings.

When it came down to the footwear, Venus tied her outfit together with white sneakers.

White sneakers remain as the ideal go-to casual sneaker. The right pair of white kicks can offer endless versatility. The eternally stylish silhouette is timeless and manages to be simultaneously on-trend every season.

The U.S. Open is the final 2022 Grand Slam tennis tournament, held at the Billie Jean King National Tennis Center in New York City. Running from Aug. 29 to Sept. 11, the tournament will air on ESPN, ESPN2 and ESPN Plus. 128 players will be competing in this year’s competition, including Serena Williams, Daniil Medvedev, Rafael Nadal, Iga Swiatek and Anett Kontaveit. The event also draws a range of celebrity guests; so far, this year’s has included Queen Latifah, Rebel Wilson, Lindsey Vonn, Hugh Jackman and Bella Hadid.

PHOTOS: Click through the gallery to see Williams’ top street style looks over the years.