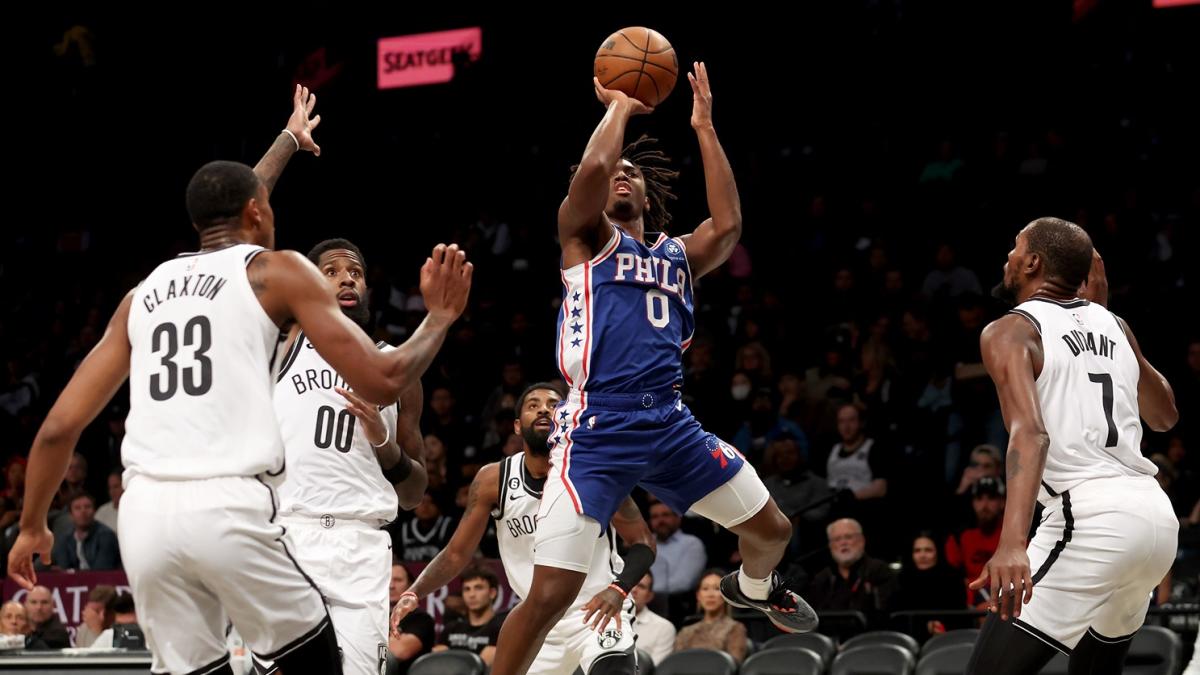 NEW YORK — It took Tyrese Maxey less than a half Monday night to exceed his scoring average from the 2021-22 season.

Just like last year, Maxey was a big bright spot in the Sixers’ preseason opener, recording 20 points on 6-for-8 shooting and three assists in a 127-108 win over the Nets in Brooklyn.

The Sixers did not play Joel Embiid, James Harden, P.J. Tucker and Danuel House Jr. (more on that below).

Appearing in his first game since the Sixers’ playoff loss to the Hawks on June 20, 2021, Ben Simmons went 19 minutes and posted six points, five assists and four rebounds.

The Sixers’ second preseason game will be Wednesday night in Philadelphia against the Cavs. Here are observations on their victory Monday:

Big names on the sidelines

Neither Embiid nor Harden had inactive days; both ran through individual workouts following the Sixers’ shootaround. Embiid poured sweat onto the Barclays Center floor before the game and slammed in a loud windmill dunk after driving by skill development coach Jason Love.

As for Harden, Embiid and Tucker, Rivers said the veterans’ night off was planned well ahead of time. There’s no need to play that trio heavy preseason minutes as long as the Sixers feel ready to roll by opening night Oct. 18 in Boston.

Maxey scored the Sixers’ first 10 points. The opening six were from long-range, transition jumpers that have been in his wheelhouse for quite a while at this point.

The 21-year-old picked up his next four with a driving layup and two free throws he earned by attacking an unsettled Nets defense. Our impression continues to be that drawing more foul shots may very well be a major area of improvement for Maxey this year. His added muscle and this summer’s education from “big brother” Harden are among the factors suggesting he’ll make progress in that department.

De’Anthony Melton also showed off all the best parts of his reputation in the opening stages. Three minutes into the game, he had a deflection; a bothersome rearview contest; a near-theft on a loose backcourt pass; and a steal of an errant Simmons dish. The Sixers and Melton will fine-tune exactly how to weaponize his ball-finding magnetism throughout the season, but it’s evident that his presence should often trouble the opposition and boost the Sixers’ pace.

The team’s transition game (and offense as a whole) was strong during a 42-point first quarter. Tobias Harris nailed a catch-and-shoot three-pointer off of a well-executed after-timeout play. Melton confidently stepped into a transition triple. Furkan Korkmaz stretched the Sixers’ lead to 19 points by slicing through the Nets’ porous defense and making a Euro-step layup.

Life suddenly became less comfortable for the Sixers when the Nets responded to a 55-35 deficit with a 15-0 spurt. Melton missed a quick, contested three instead of forcing Brooklyn’s defense to work. He then turned the ball over on the Sixers’ next trip, leading to a Nic Claxton dunk.

Some of that rough patch can be chalked up simply to individual Melton mistakes. Still, the Sixers will want Maxey to assert himself and stabilize the Sixers in those situations when Harden is off the floor.

He helped the Sixers regain their footing Monday, demonstrating a determination to reach the paint and reaching 20 points by halftime. Both Maxey and Melton watched the entire second half from the bench.

He threw down a fast-break dunk, hit Royce O’Neale with a cross-court pass to set up a corner three, and chased down Matisse Thybulle in the open floor to create a turnover.

Simmons also did not look different as a shooter. He only struck the backboard on a fadeaway jumper attempt from just inside the foul line. The 26-year-old shot 0 for 2 on his free throws.

Simmons prides himself on being an ultra-versatile, position-less player. The Sixers started someone who’s in that same broad category, using Paul Reed (10 points, five rebounds, three steals) at center. Reed committed the sort of miscue that tends to frustrate Rivers late in his first stint, fouling Durant on a jumper. As usual, Reed jammed several positive plays into his evening, too. He looked to have a physical strength advantage against Brooklyn veteran Markieff Morris on a few third-quarter plays.

The Sixers briefly played a Harris-Georges Niang frontcourt in the first quarter, but Montrezl Harrell was their primary No. 2 center. Like Reed, his effort and instincts frequently put him in productive spots. He notched 10 points and five boards.

However, Harrell committed all six of his fouls in just 12 minutes. He was displeased with the final call — a block that he believed to be a charge — continuing his argument from the sidelines. No preseason contest is a huge deal, but the Sixers will obviously ask Harrell to avoid being in that position when the games count.

Isaiah Joe and Korkmaz combined for 24 points and 5-for-10 shooting from three-point range off the Sixers’ bench. Joe, who led the Sixers in preseason scoring last year, looks set to be on the team’s opening-night roster barring something unforeseen.

Trevelin Queen did not enter the game until the fourth quarter and Charles Bassey’s first action came after Harrell’s sixth foul.

Queen was removed from the action in the middle of the fourth after falling hard on a drive and grabbing the back of his head. He was looked at by Sixers head athletic trainer Kevin Johnson on the sideline and stayed on the team’s bench.