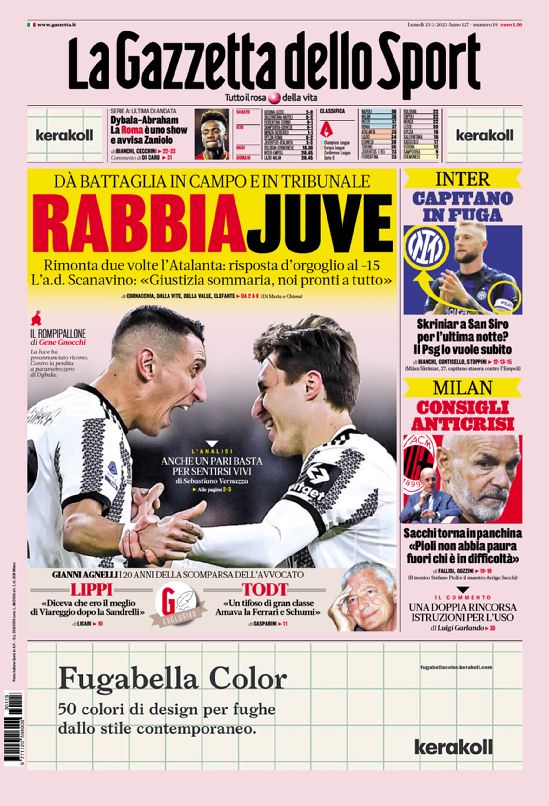 They do battle on the field and in the tribunal

CEO Scanavino: ‘Summary justice, we are ready for anything’

Gianni Agnelli, 20 years since the death of L’Avvocato

Lippi: ‘He said I was the best thing out of Viareggio since Stefania Sandrelli’

Todt: ‘A fan of such class, he loved Ferrari and Schumi’

Dybala-Abraham, Roma are a show and warn Zaniolo

Inter, captain is running away

Skriniar at San Siro for the last night? PSG want him right away

Sacchi back on the bench: ‘Pioli must not be afraid, leave out those who are struggling’

From the Champions League dream to the sentence: draw with Gasp leaves them in limbo

Wobble and then reaction against Atalanta: 3-3 comeback thanks to Danilo

Di Maria and Milik on target too

Special One: ‘Zaniolo will stay’

Arsenal, continual break away at the top

CR7 dry, no goal on his debut

Proud reaction to the damning -15: twice they fight back against a super Atalanta and rediscover their quality

Scanavino: ‘We will fight against injustice’

Now the Hien deal could collapse too

Milan on Zaniolo: they challenge Tottenham

Ex-teammates and fans: ‘A life lesson’