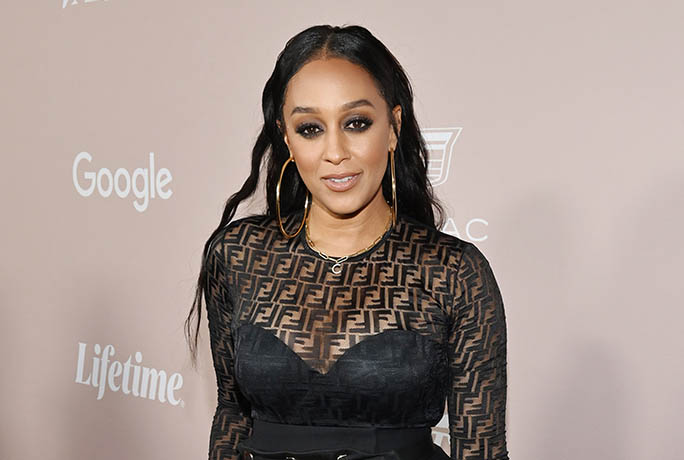 Tia Mowry flipped her hair and jumped around in a stylistic preppy outfit for an Instagram Reel this week. Using Beyonce’s “Alien Superstar” she turned over her shoulder, giving the viewers a classic side angle of her over-the-knee black boots. Then she danced with giddiness in the second half of the video, showcasing her majorly black cardigan mini dress.

The black mini cardigan vocalized long sleeves, to which she rolled up as the fabric rested upon her elbows, the bright green contrast and white colorblock shown with much visibility. This contrast was also seen at the hem of her cardigan as well as her neckline. The cardigan had a deep cut, as she closed each button, revealing a black undershirt as she danced and snapped her fingers.

Mowry embraced the ‘no-pants’ trend, which became popular in 2018 thanks to influencers such as Ariana Grande, Olivia Culpo and more. It made a revival in September with Karlie Kloss and Gwen Stefani, in July with Maren Morris on “Today” show, last June with Chrissy Teigen’s appearance on “Late Late Show With James Corden” and in May with Sophie Turner, among other stars in recent months.

The preppiness of the attire was cohesive with her all-matte black over-the-knee boots. These boots featured a pointed toe with a lace-up installment at the back of her thighs. As the cardigan was used as a mini dress, using such tall boots allowed for coordination as shorter boots would have produced a different look.

For her accessories, the ‘Sister-Sister’ actress wore much of gold jewelry to bounce off the darker tones. Her wrists were completely covered in an assortment of different gold bracelets, changing in size. Her fingers were adorned with multiple rings and she pulled the look together with a pair of large hoop earrings. As for her hair, she went with a dramatic choice, displaying the jumbo box braids with a side part that reached her lower back.

Box braids are immensely versatile and the star used her hair to showcase her duality of sultriness and comedy at the same time. She posed in her living room, allowing the white walls to magnify her rich look. Over-the-knee boots are a definite underdog in the closet and as fall approaches, it is definitely time to use them more often. They can be paired well, as shown by ‘The Game’ actress.

PHOTOS: Over-The-Knee Boots At Every Price