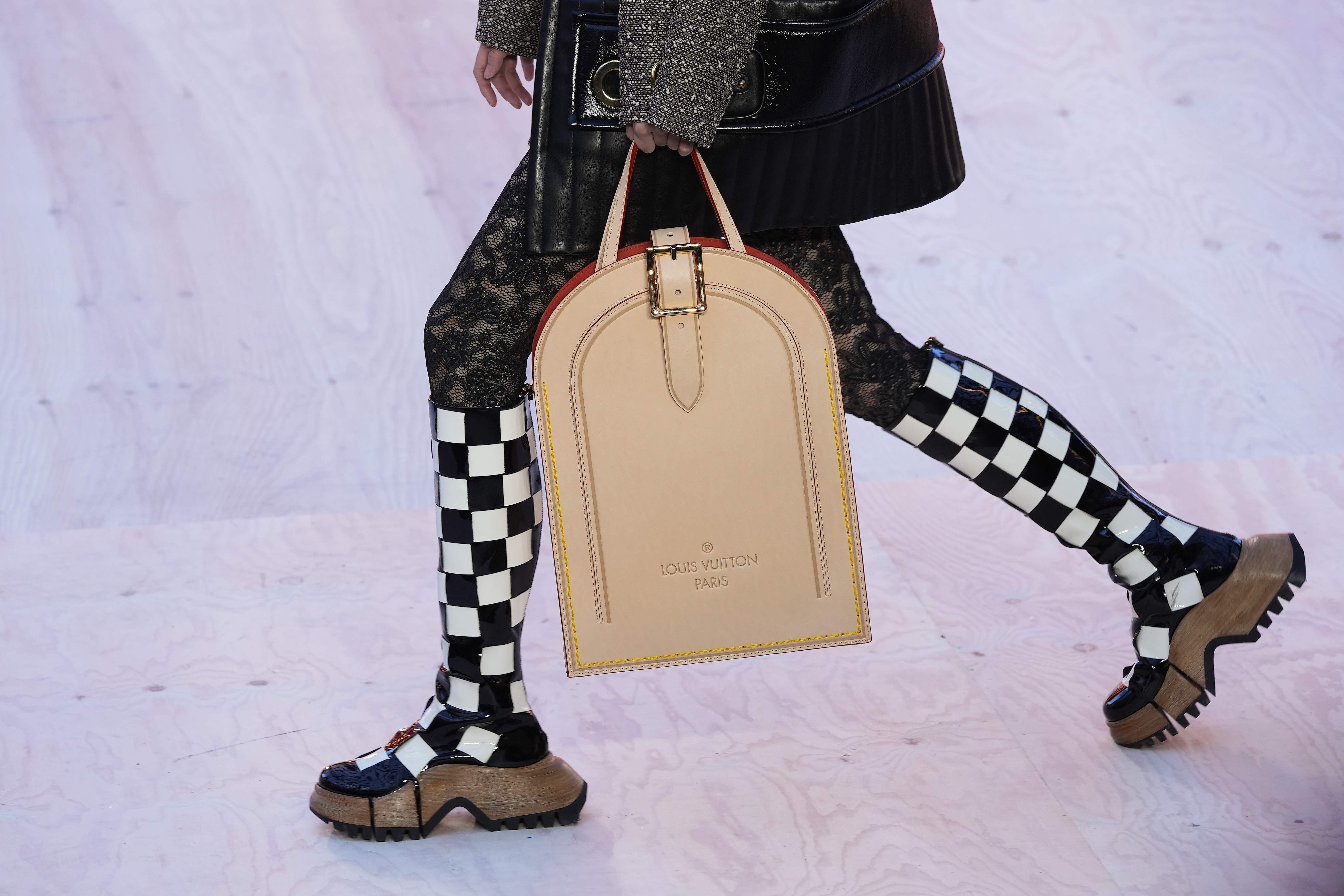 The spring summer ’23 season of Paris Fashion Week had promised to be jam packed with all of the usual presentations and appointments, and then some. But while the week delivered in its pace and quantity, it was also filled with missteps and miscalculations on quality. Even if its a common saying in fashion, more is not always more.

Still, the season offered a point of view on what comes next, especially as the world muddles through pandemic and economic uncertainty. The same goes for footwear, an accessory that tends to reflect feelings of security (or lack thereof), celebration and shifting power structures.

The last of which pertains to the platform, which continues to be the enduring silhouette of this era, as an accessory of defense, of power, and of voice.

Haven’t you heard? Even Rick Owens is getting into Barbiecore, and his signature apocalyptic, grill-toed boots followed suit in colorful tones. They also got a major evening update with fur accents, such as this caged platform sandal, the ultimate statement shoe that makes the designer’s previous statement platforms look like wallflowers.

The French fashion brand doesn’t usually stray far from its classics when it comes to footwear, but for spring summer ’23, creative director Virginie Viard added a subversive twist in a fishnet overlay on the Mary Jane, along with fishnet hosiery to match. Some were even boots with a trompe l’oeil effect, zipping all the way up to the knee.

The shoe maestro is back and proving that a lot can be done with just a little bit of embellishment. Gold button hardware on a pair of the designer’s strappy leather sandals actually have a lariat effect, meaning the buttons can be moved

It was inevitable that the French designer’s lipstick tubes would become his next hit heels. Louboutin took the style (which launched last season) up a few notches with the addition of crystal embellishments for a style that is sure to be on every collector’s list.

If the fashion sneaker is a little dead, it only makes sense to bring its shapes back to dress shoes and boots. Vuitton did so by taking its exaggerated arch on the hit Archlight sneaker, recreating it in a wooden sole and attaching it to boots that feel sporty, rugged and haute all at the same time. The additional of a patent leather checkerboard upper makes for eye candy out of a Wes Anderson film.

Jonathan Anderson is fashion de facto surrealist as of late, and for spring summer ’23 he turned his previous season idea of 3D balloon shapes into actual balloons, using piles deflated balloons to decorate pairs of pumps that may or may not make it into production. The footwear (which also included pumps in rubber that appeared to be full of air) was an apt and timely exploration of inflation and deflation.

Leave it to one of the OG footwear brands to explore fashion’s current obsession with Western footwear to come up with a new spin on the motif. Founder Annamaria Brivio looked to her own collection of vintage Western belt buckles to create a sized-down buckle detail for a series of mules and buckles sandals. Giddy up.

Everyone may be talking about Valentino’s latest take on platforms. But a closer look at the spring summer ’23 collection reveals a sequin pump, matching legwear and fully embellished skirts that make for a very full look on the bottom, one we think ladies who lunch might get behind.

The Belgian designer knows when to go maximal and when to keep things simpler. He did the latter for spring summer ’23 footwear, letting ready-to-wear florals and pastels shine and letting the heels get more serious.

Mary Janes are poised to finally make their comeback (see also Prada and Chanel), but Dior’s version managed to captured a provocative, slightly ironic take on the classic shoes, with strap after strap of tiny buckles and inverted platform heels. Let’s hope they zip up the back.