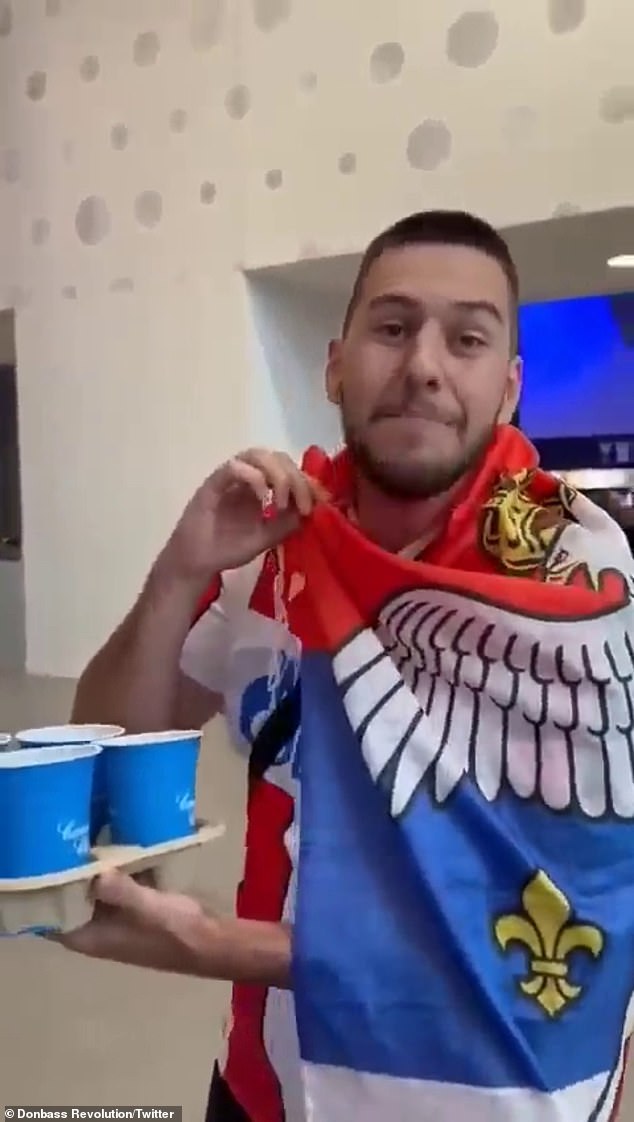 Australian Open security guards have been branded ‘racist’ for bizarrely trying to confiscate a Serbian flag from fans after mistaking it for Russia’s national symbol.

A social media account that appears to be affiliated with pro-Russian media posted a video of the encounter, in which fans who appear to be supporting Serbian players who were stopped by officials.

Russian and Belarusian flags are now banned from the Melbourne Park grand slam, after a rogue fan used the former to taunt Ukrainian player Kateryna Baindl during a match.

In the video, a security guard can be seen flipping through a book that appears to contain pictures of many different flags.

A man wearing a Serbian flag confronted Australian Open officials and labelled them ‘racists’ for confusing his flag for a Russian one, which are banned

‘You’re f***ing racist,’ one of the fans can be heard saying in the background as the official tells them Russian flags are banned.

‘It’s a Serbian flag. Serbia is central Balkans region in Europe. Do you know what a country is?’ the fuming fan tells the security guard while wearing the Serb flag around his neck as a cape.

The irate official then snaps at the fans, telling them they don’t have permission to film him, which they tell him they don’t need – something he clearly doesn’t agree with as he continues to get agitated after they call out his mistake. 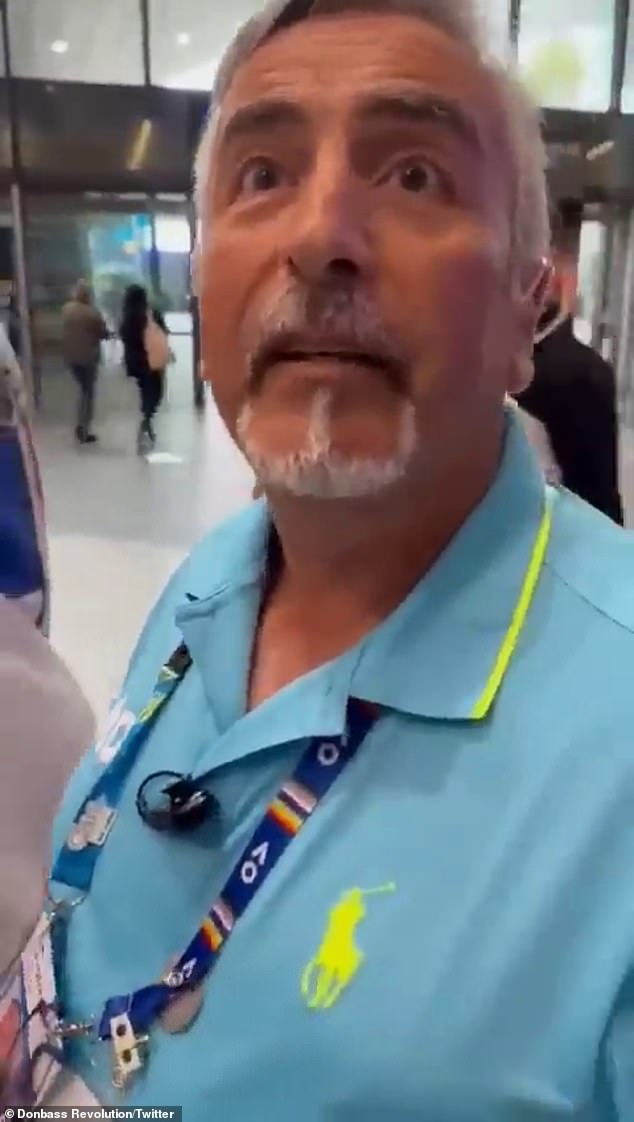 In the video, the Australian Open official can be seen getting increasingly agitated after the fans confronted him over his mistake

‘Call the cops, arrest us … you’re gonna be on YouTube,’ says one of the fans, with the official snapping back ‘you’re a lovely man’.

The security guard then tries to say that the fans told him ‘they hate Croatians’, but one of spectators replies that his best friend and girlfriend are from the country.

‘Repeat after me; white, blue red … this is red, blue, white,’ one of the fans says as he points toward the Serbian flag he is wearing.

Increasingly agitated, the security guard then storms off after telling the fans they are ‘f***ing idiots’ while his young female counterpart confirms politely it is a Serbian flag.

‘The American flag, that’s the one you should ban,’ one of the fans jokes, with the young female official agreeing ‘I know right!’ before shaking their hands and thanking them for understanding.

It’s an embarrassing encounter made all the worse by the very obvious differences between the two country’s flags. 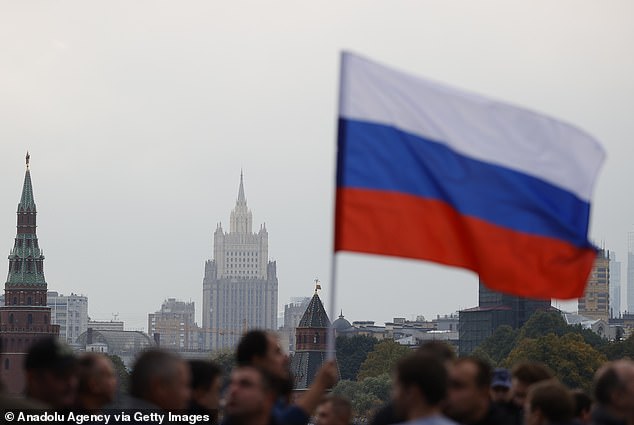 The Russian flag has been banned for the Australian Open, and officials have been told to confiscate them 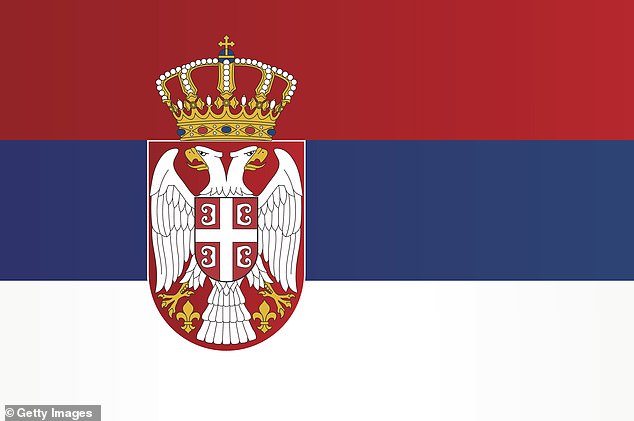 The Serbian flag is not only in a different colour order to the Russian flag, but also features a large shot of the country’s coat of arms

Not only does the Serbian flag have a different order (red, blue, white from top to bottom), it features a large shot of the country’s coat of arms featuring two eagles in the centre.

It’s not the first the flag controversy to hit the grand slam, with even embassies getting involved in previous dramas.

Unlike Wimbledon, players from Russia and Belarus have been able to compete at the Australian Open, but they must do so as ‘neutrals’ instead of representing their countries.

However, some fans used the flags to prove a political point about Russia’s invasion of the country – and kicked off a controversy in the process.

When Ukraine’s Baindl took on Russian Kamilla Rakhimova earlier in the tournament, she repeatedly had a Russian flag waved at her as a taunt. 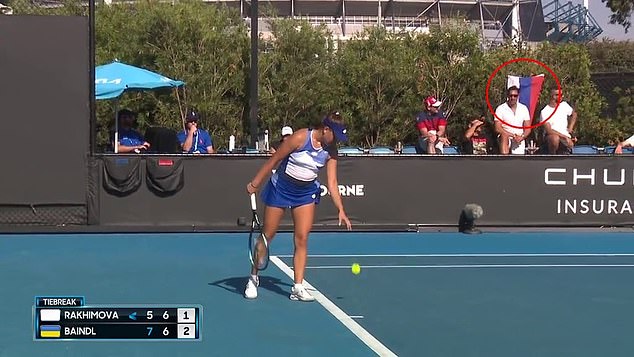 It led to Ukraine’s ambassador to Australia, Vasyl Myroshnychenko, slamming Australian Open organisers for allowing the symbol to be displayed.

‘I strongly condemn the display of the Russian flag during the game of the Ukrainian tennis player Kateryna Baindl at the Australian Open today,’ he wrote on social media.

‘I call on Tennis Australia to immediately enforce its ‘neutral flag’ policy.’ 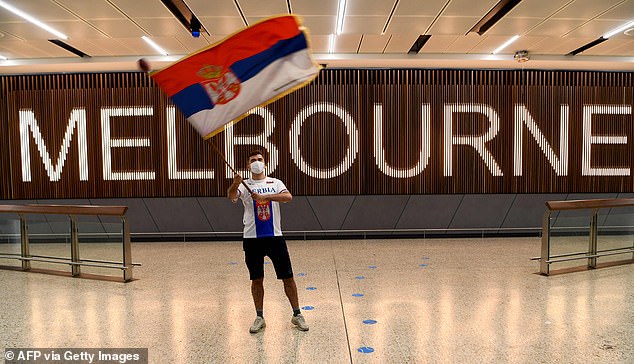 To the delight of most fans, organisers swiftly banned the flags of Russia and ally Belarus, who are both engaged the invasion, which has been condemned all over the world.

‘That is disgraceful, kick them out and ban them for life,’ one commenter wrote about the incident.

‘Ashamed my country has let Russians play at the open this year,’ tweeted another.

‘As an Aussie I am deeply embarrassed by this. What the hell,’ added a third.

However, not everyone was impressed. 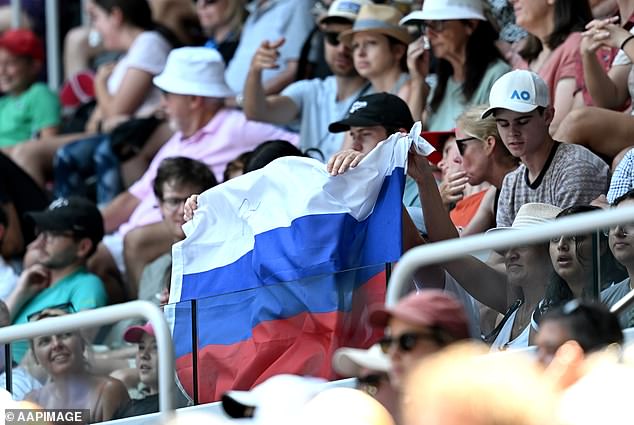 Russia’s embassy took aim at organisers for ‘politicising’ the event, and suggested the tournament should instead focus on ‘providing the best possible environment for the enjoyment of tennis’.

‘It is truly regrettable to see the championship organisers succumb to overt and rather brazen political manipulation, sacrificing the spirit of fair play once inherent in the Australian Open,’ a statement by the embassy said.

Given the video was posted by purported ‘Novorossiya state affiliated media’, and has almost 6000 followers, it’s possible Russia was seeking to embarrass Australian Open officials as much as possible.

Novorossiya refers to the Donetsk and Luhansk in eastern Ukraine that pro-Russian separatists want to control.