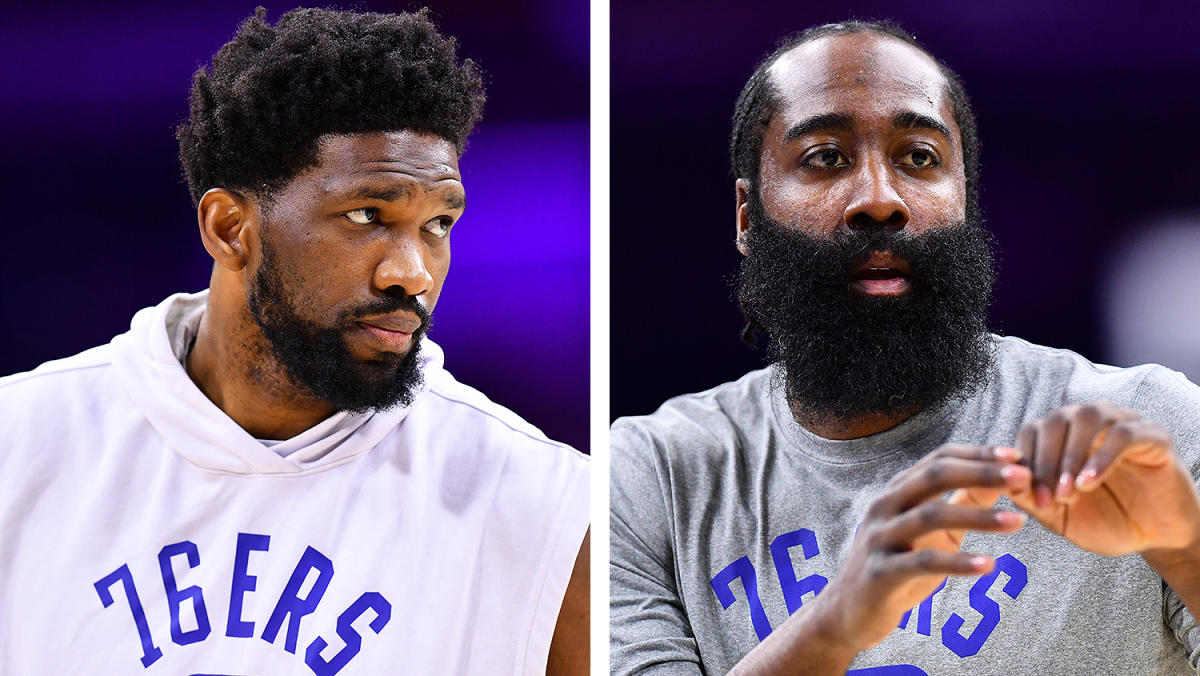 NEW YORK — Long after their teammates had rushed onto the buses following the Sixers’ shootaround Monday, James Harden and Joel Embiid worked on adjacent courts.

As usual, assistant coach Sam Cassell kept a close eye on Harden’s jumpers. He ensured it wasn’t a casual session, too.

Cassell set certain numerical targets as Harden fired up deep three-pointers. If he missed four in a row, the count stopped and Harden was back at zero. At one point, a few misfires led to the 33-year-old running up and back a court length. Naturally, Harden also made plenty of shots.

The post-shootaround habits of the Sixers’ stars were more notable than usual because it would be surprising to see either appear in the team’s preseason opener Monday night against the Nets. Head coach Doc Rivers told reporters Sunday that “at least three” Sixers starters will sit. The Sixers traveled to New York after concluding their training camp in Charleston, South Carolina.

Embiid certainly did not act like he was saving himself for significant game minutes. Sixers assistants Jason Love and Dwayne Jones ran him through a routine that included reps on the wing, at the elbow, and behind the arc.

When the lights turn on in Barclays Center, one of Embiid’s former teammates will presumably receive much of the crowd’s attention.

After holding out of last year’s Sixers training camp, telling the team he was not mentally ready to play, being traded to Brooklyn in February and undergoing back surgery in May, Ben Simmons is expected to take the floor. His last NBA game was the Sixers’ Game 7 playoff loss to the Hawks on June 20, 2021. The two players who headed to the Nets along with Simmons won’t be on the court; Seth Curry (left ankle injury recovery) is out and Andre Drummond is now a Chicago Bull.

At the Sixers’ media day a week ago, Embiid gave a well-practiced response to a question touching on the Sixers’ off-court ups and downs last season.

“Which drama? I don’t remember any of that,” he said. “I thought last year went great. As a team starting the year, I thought it went well. I didn’t feel any distraction; we were still winning games, we did a great job.

“And then we added James, and we went to another level. So like I said, we know what we’ve got to do. We kind of know what it takes to win, so we’ve just got to go out and do it.”

Win or lose, Monday’s game does not matter. Harden sure went about his workout as if his jumpers meant something, though. He yelled, “Balance!” at himself following a wayward step-back try.

When Harden requested firm, game-style passes on his catch-and-shoot threes from the wing, Cassell was amused, quipping, “Oh, now it’s the passing!”

The intensity remained high as Harden wrapped up, and the banter also persisted. After Harden jabbed that Cassell was “never a point guard,” Cassell boasted with a smile that he’d registered more assists during his 15-year playing career than Harden. The disbelieving 10-time All-Star demanded a fact check and volunteered to run if Cassell was right.

No humiliated sprinting was required, and no meaningful basketball is needed quite yet from the Sixers’ stars.