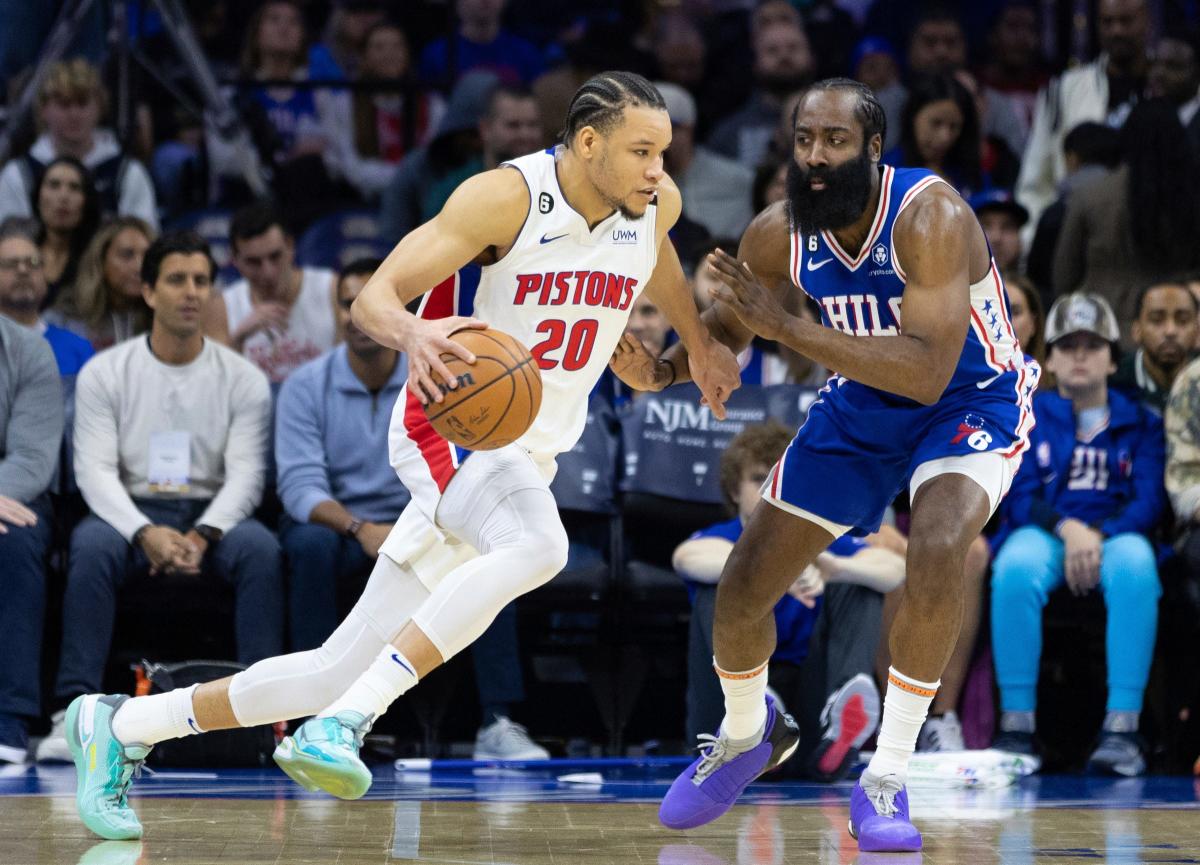 After missing the 76ers’ trip to Little Caesars Arena on Sunday with left foot soreness, Joel Embiid returned for their rematch in Philadelphia on Tuesday.

Unluckily for the Detroit Pistons, Embiid’s return coincided with an injury to their best defensive big man.

Isaiah Stewart was a late scratch for Tuesday’s game with left shoulder soreness. Joining him on the injury report was Bojan Bogdanovic, who missed the game with right calf soreness, and Jalen Duren, who missed his second-consecutive game with right ankle soreness. Couple that with the ongoing absences of Cade Cunningham, Marvin Bagley III and Isaiah Livers, and it was a rough night for Detroit.

Nerlens Noel was the only healthy center on their roster. And Embiid feasted against Detroit’s small lineups, and finished with 36 points and 11 rebounds in just under 24 minutes of action to lead Philadelphia to a blowout 147-116 win over the Pistons at Wells Fargo Center.

Detroit endured one of its worst offensive nights of the season, shooting 40.4% overall. The Sixers shot 60.7% overall, and also got strong performances from James Harden (16 points, 15 assists, 11 rebounds) and Tyrese Maxey (16 points).

See also  Watch Jayson Tatum get ejected for… nothing really

The Pistons cut the deficit to four early in the second quarter, but the Sixers overcame a sloppy, turnover-filled first 15 minutes of the game to outscore the Pistons 32-14 after the 9:34 mark of the quarter and take a decisive 65-43 lead at halftime.

Detroit’s flurry of injuries forced Dwane Casey to make major changes to his starting lineup. Kevin Knox and Nerlens Noel both made their first starts of the season, and Saddiq Bey started his second-consecutive game alongside Killian Hayes and Jaden Ivey.

Bey had to spend time at center to make up for Detroit’s depleted depth. The Pistons eventually resorted to repeatedly fouling him before the Sixers finally subbed him out for good with 3:50 remaining in the third quarter.

The Pistons’ second unit found some momentum in the second half — not enough to lead a comeback, but enough to cut a 41-point deficit to 32 at the end of the period. McGruder, Burks and Diallo brought energy and shot-making off of the bench, helping to make up for the first unit’s struggles.

Diallo might’ve been the most impressive player on Detroit’s roster, continuing his run of strong play dating back to December. He scored 12 of his 14 points through the first three quarters, and was a pest on defense as well. Diallo was only credited for two steals, but he had a role in multiple Sixers turnovers. He grabbed the ball from Tobias Harris early in the second quarter to set up a Rodney McGruder 3-pointer on the other end, cutting the deficit to 33-29. Diallo stole the ball from De’Anthony Melton less than a minute later, but missed a transition layup attempt off of a lob.

Detroit was shorthanded, but their miscues on offense can’t solely be placed on their lack of depth. The Pistons missed several easy attempts in the paint and were unable to capitalize on the Sixers’ mistakes. They scored just 14 points off of 17 Sixers turnovers, while allowing Philadelphia to score 22 points off of their 11 turnovers.