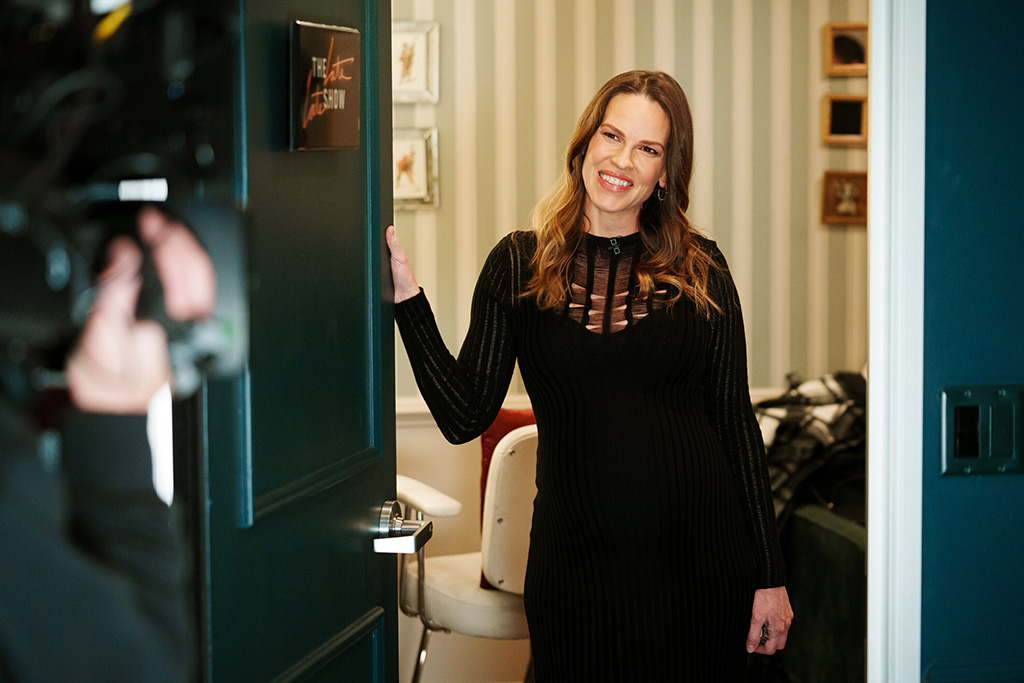 Hilary Swank appeared on “The Late Late Show With James Corden” alongside Gwyneth Paltrow yesterday. The “Camp Wilder” actress spoke about her hit show “Alaska Daily” and filming while pregnant — Swank is expecting twins with her husband, Philip Schneider.

For her late-night show appearance, Swank dressed up in a black maxi dress with strappy footwear.

Swank’s all-black ensemble was comprised of a black knit dress featuring an opaque black bodice and midsection followed by see-through mesh sleeves and a skirt.

On the accessories front, the “Million Dollar Baby” star sported gold hoops that hid behind her long wavy locks.

While simple, the outfit acts as a cute, and most importantly, comfortable introduction to pregnancy style. The aim for many expecting mothers is to balance the need for comfort, while still being able to express themselves through their fashionable endeavors. On that note, pregnancy fashion has evolved to include more daring clothing options, offering expecting parents an alternative to slouchy wears thanks to the fashion influence of fellow mothers like Rihanna, Chrissy Teigen, and Ashley Graham.

On her feet, Swank opted for black strappy sandal heels. The heel itself was skinny and long while the toe was rounded, making for a dainty construction. Black straps ran across the tops of Swank’s feet and around her ankles, securing the style in place. Strappy sandal heels are a versatile and approachable style loved by many top celebrities, Swank included.

PHOTOS: Check out the evolution of high heels over the years.