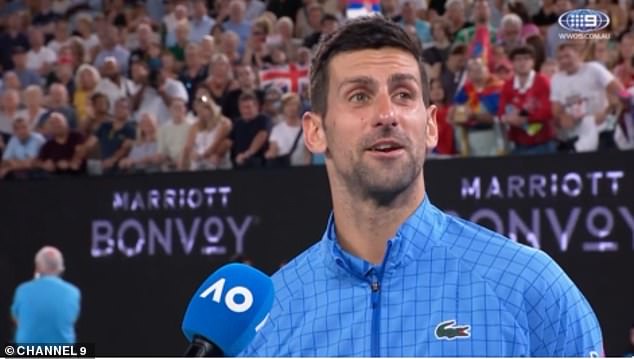 Novak Djokovic was in a jovial mood on Monday night following his demolition of Alex de Minaur, and left the crowd in stitches with a risque joke when discussing his hamstring injury with Jim Courier.

There have been huge concerns surrounding Djokovic’s fitness in Melbourne this year, with the 35-year-old struggling with a hamstring injury throughout the first week of the Australian Open.

But he brushed off any concerns on Monday night with a straight sets victory over hometown hero Alex de Minaur, cruising to a 6-2, 6-1, 6-2 win on Rod Laver Arena. 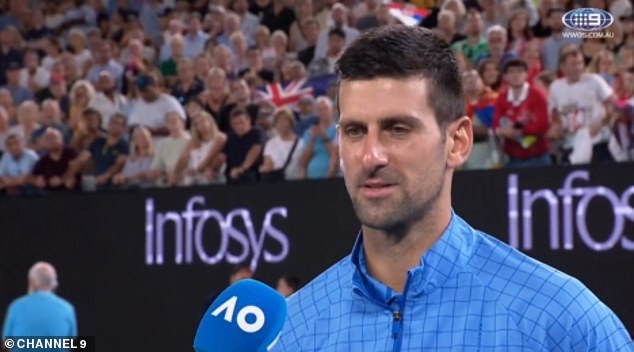 And when discussing the status of his injury with Jim Courier on court, Djokovic amused the Melbourne crowd after revealing he was taking anti-inflammatory pills to help him deal with the injury.

‘Tonight it wasn’t obvious that I was dealing with an injury,’ he said. I didn’t feel anything today, so today was great.

‘I thank my medical team, my physio, I thank God, I keep on going obviously, I don’t want to celebrate too early. I was feeling very good in the first match, second match not so great so I know things can change really quickly.

‘I’ve been taking a lot of pills these days, it’s not ideal, trying to mask the pain. Not those kind of pills guys! [They are] Anti inflammatory pills, which I normally don’t like taking, but I had to find a way with my team and take it day by day. 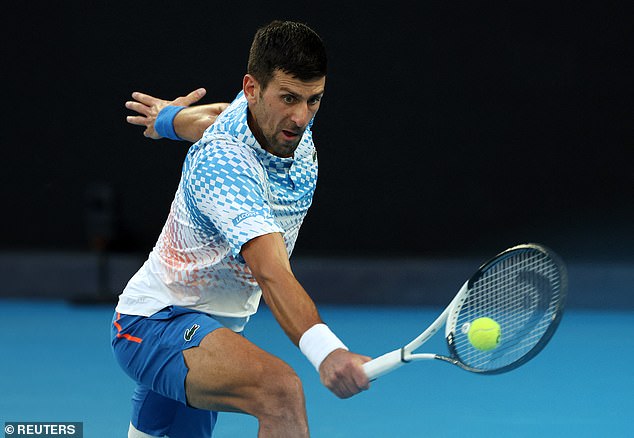 ‘Today was the best day so far of the tournament and hopefully it stays that way.’

It was a quick night at the office for Djokovic, with an expectant Melbourne crowd hoping for a long battle between the pair, but he was unapologetic for his speedy match after sailing through.

‘I cannot say I’m sorry you haven’t watched a longer match,’ he told Jim Courier. ‘To be honest, I really wanted to win in straight sets.

‘I thought the first four or five games were quite close, but I started feeling more loose, to go through the ball and be more aggressive.

‘I felt he was a little bit nervous and you know tennis is a very quick, very dynamic sport so I kept my focus all the way through and I played my best match of this year so far.’