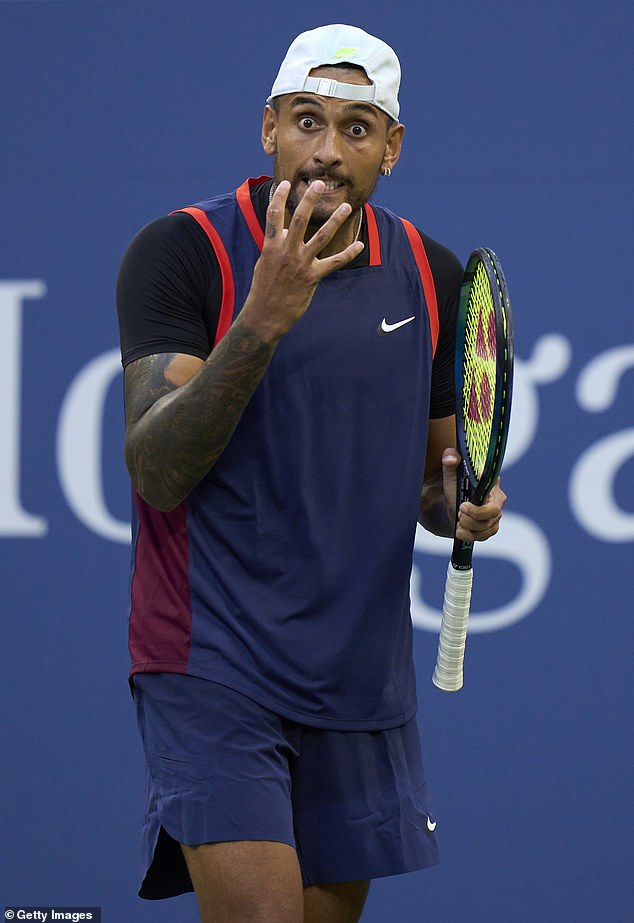 Aussie firebrand Nick Kyrgios has been fined $11,000 – the biggest penalty of the US Open so far – after he stunned fans by spitting on the court during a series of temper tantrums during his win over Benjamin Bonzi on Thursday.

The hit to his wallet was announced shortly before the Wimbledon finalist teamed up with his best mate and fellow Aussie Thanasi Kokkinakis to down Hugo Gaston and Lorenzo Musetti 4-6, 6-3, 6-4 in the first round of men’s doubles action at the grand slam.

Kyrgios made headlines when he complained to the chair umpire about a fan smoking marijuana, got warned for spitting on the court and let fly with a series of expletives at his own support box during his singles victory over the Frenchman. 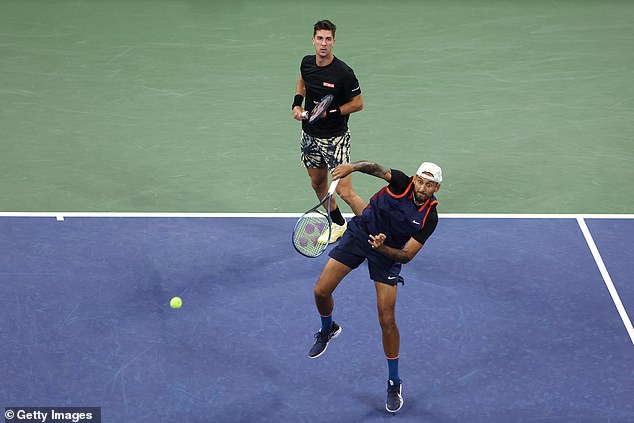 After a ‘nightmare’ first-round singles win over best mate Thanasi Kokkinakis, he teamed up with his best mate to win their doubles match on Friday

The $11,000 hit was handed down for unsportsmanlike conduct after the Australian spat on the court and was heard telling supporters in the players box – including girlfriend Costeen Hatzi – to ‘go home if you’re not going to f***ing support me’ among several other expletives.

His behavior was condemned by fans and Aussie tennis great Todd Woodbridge, who advised Hatzi and the rest of his entourage to ‘stand up and walk out’ if he kept taking his frustrations out on them.

‘They’ve got nothing to do with what goes on on the court. That is up to Nick.

‘Why does he [Kyrgios] want his player’s box to tell him what to do when he’s coach-less? I mean, goodness me,’ he said.

After defeating Kokkinakis in a first-round match he called a ‘nightmare’ because of the pair’s friendship, Kyrgios had his temper under control as they survived the early scare against Gaston and Musetti. 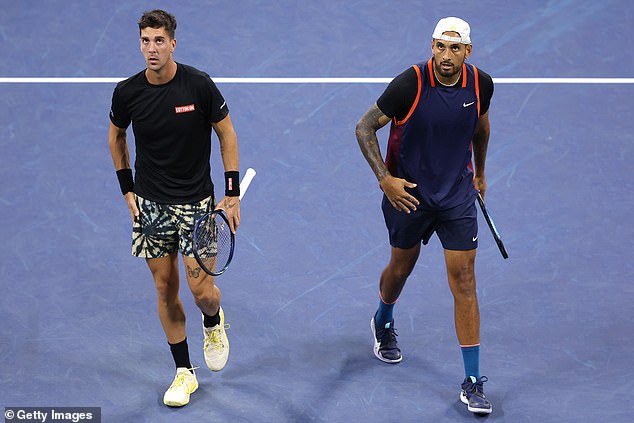 The duo survived a scare when they lost the first set to Hugo Gaston and Lorenzo Musetti before winning through 4-6, 6-3, 6-4

He plays American JJ Wolf in the third round of the singles on Saturday but insists he isn’t looking beyond him to a possible clash with world No.1 Daniil Medvedev.

‘He’s got a massive game,’ Kyrgios said of the 23-year-old from Ohio.

‘I love the way he plays tennis. I love the fact that he has a big serve, tries to take it to the opposition. Serves big and plays big.

‘With a game like that, he’s going to have some great results. Obviously he seems like a hard worker, as well.

‘I’m expecting an incredibly hard match. I know it’s not going to be easy at all. 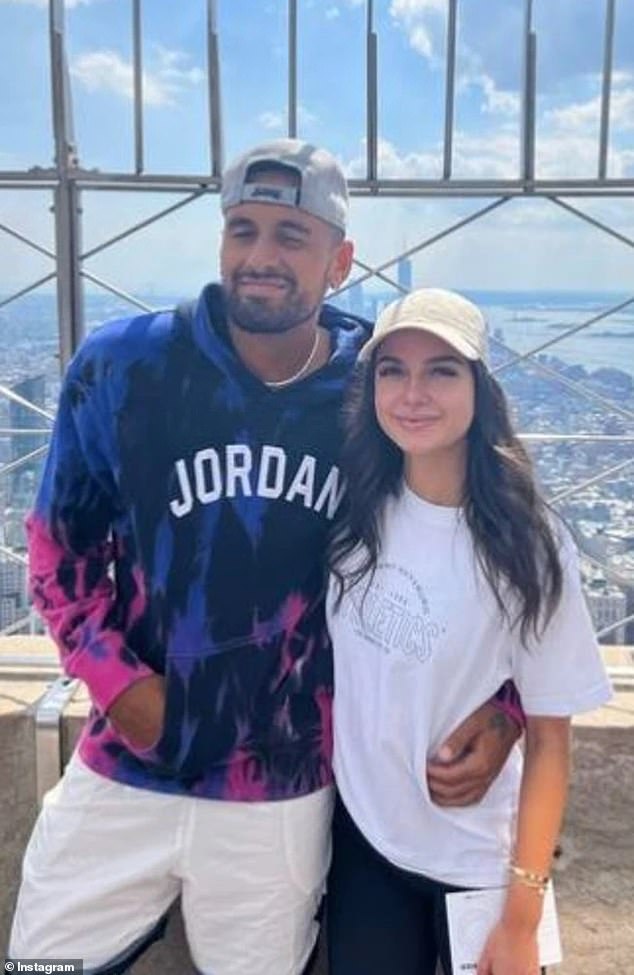 ‘I’m going into that probably the favourite, but I’m not going to take him lightly at all. I know he’s beaten some great players.’

Kyrgios plays Wolf on Saturday morning, Australian time after his fellow Aussie and one-time girlfriend Ajla Tomljanovic takes on the great Serena Williams in the first match of the bumper night session.

The stakes are high, with Tomljanovic hoping to make the second week in New York for the first time and Williams fighting desperately to fend off retirement once more in her emotion-charged farewell to tennis.

Williams is officially one defeat away from the end after the 23-times grand slam champion and big sister Venus lost in the first round of the doubles on Thursday night.