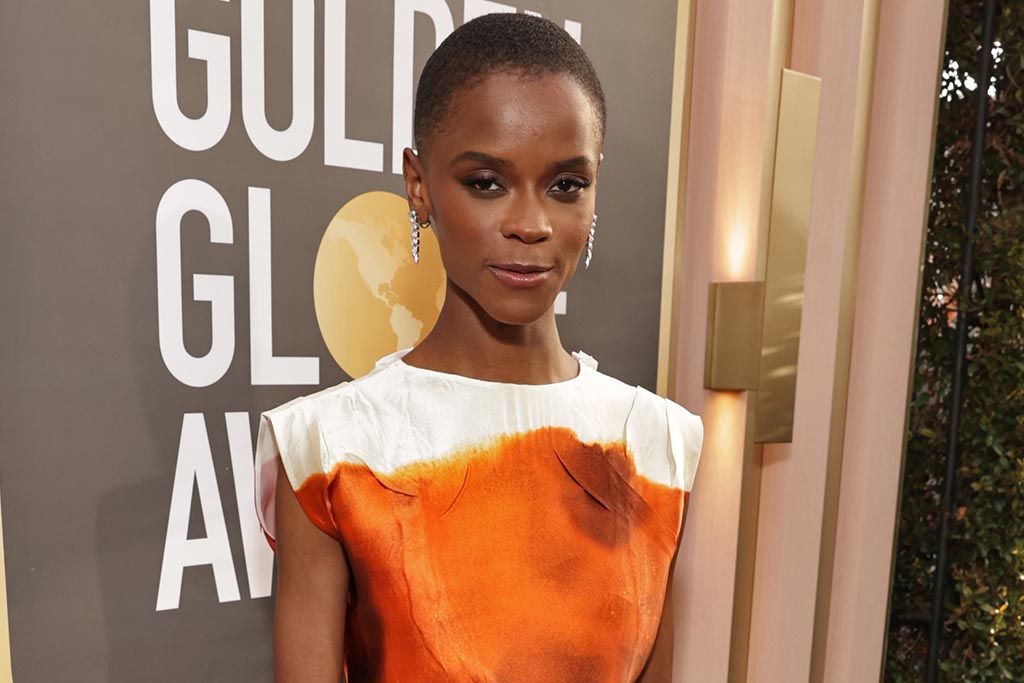 Letitia Wright gleamed in ombré hues for the 2023 Golden Globes.

While hitting the red carpet at The Beverly Hilton in Beverly Hills, the “Black Panther” star arrived in a sharp two-toned gown. Her ensemble featured a sleeveless silhouette in cream silk, complete with printed ombré orange paneling down its front. Triple-layered diamond post earrings and a cocktail ring completed her ensemble with an elegant finish.

When it came to footwear, Wright strapped into a pair of heeled sandals in a bright orange hue. Her satin style included thin ankle and toe straps, complete with triangular pointed soles. Though the complementary set’s heels could not be seen, they likely featured a stiletto silhouette, given the pair’s traditional shape.

“It was something that, again, it was a bittersweet experience. I was really excited but really sad at the same time because my brother wasn’t here,” Wright revealed on taking the hero’s mantle from the late Chadwick Boseman to Variety. “It was a new challenge for me, but one that I tried to keep under wraps as much as I could, and I tried my best, and it came out. I’m the Black Panther.”

The Golden Globes honor the top film and television performances of the past year. This year’s event, held at The Beverly Hilton in Beverly Hills, will be hosted by comedian Jerrod Carmichael. The occasion includes a star-studded list of nominees, including Zendaya, Viola Davis, Austin Butler, Jennifer Coolidge, Michelle Yeoh and Selena Gomez, among numerous others. This year’s Globes will notably be the first held in-person since 2021, and will include a pre-show hosted and streamed online by Variety.

PHOTOS: Discover all the stars on the red carpet at the Golden Globes 2023 in the gallery.