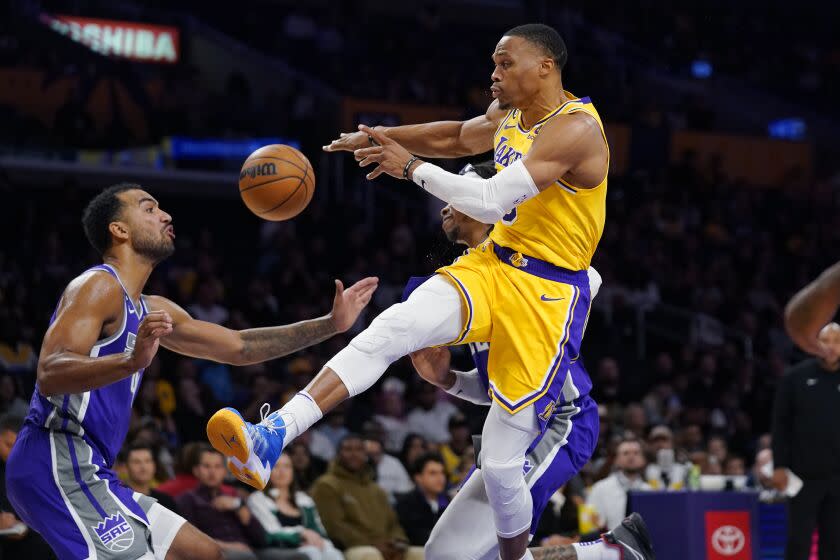 Even as the Lakers opened their preseason Monday night, questions about Russell Westbrook’s future with the organization continued to be asked.

After yet another story detailing a potential Westbrook trade — again about a Buddy Hield and Myles Turner deal — Westbrook and Lakers coach Darvin Ham discussed the former MVP’s place within the organization.

“I’m super blessed and thankful for what I have and what I’ve been given,” he told The Times following Monday’s preseason opener. “I’ve got an unbelievable support system, family, leaning on my faith. Everything else will take care of itself. So, all summer, my whole life, I’ve been hearing the stories about myself. That’s not going to change today. So, nothing new for me. I’m going to continue to keep my head down, focus on competing. And everything else will take care of itself.”

Westbrook, like LeBron James and Anthony Davis, only played in the first half Monday. The Lakers led the Kings by five at the half before being blown out in the second half.

The team has discussed Westbrook deals internally and externally throughout the summer, though they’ve fought against including two future first-round picks in nearly all talks unless the return vaulted them to the top of the West, sources with knowledge of the conversations not authorized to speak publicly told The Times. Publicly, they’ve praised Westbrook for his approach to the offseason and his commitment to Ham’s new system.

Asked about trade rumors pregame, Ham continued his public support for his point guard, who has been the subject of speculation since midway through last season.

“He’s ours, and we love him and we want him to do well,” Ham said. “Like I said, I have a plan for him. That plan included him when they gave me the job. So it’s been a great camp for him. He’s played well.”

After Westbrook scored five points on three shots to go with three assists and two rebounds, the two baskets coming on straight-line drives to the rim, Ham said the performance meant Westbrook could work with the Lakers.

“That is how the offense and the running and the system is constructed so that he can have those lanes. … It opens up larger gaps for him to be able to attack downhill. And the thing I told him is once you see the gap, no stationary dribbling. Everything has to be north and south. Go right toward the rim.”

As for the speculation, Ham said, they’re ignoring it.

“Any outside noise, that’s par for the course. I mean, it comes with the business. But he’s a Los Angeles Laker, the last time I checked,” Ham said of Westbrook. “And I’m really not mad at that. And he showed tonight, like, he’s gonna thrive in this system.

“And that’s about all I can say about that.”