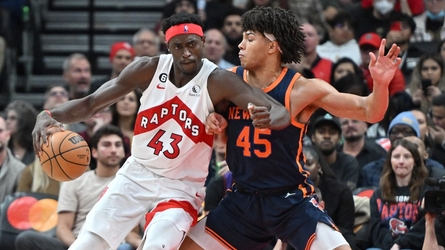 The Knicks struggled in the fourth quarter and lost their fourth straight game, falling to the Toronto Raptors, 125-116.

Here are the takeaways…

– RJ Barrett scored seven of the Knicks’ first 10 points in his homecoming game, but the Raptors started 4-for-4 from three and had a 14-10 lead after about four minutes of action. Barrett tried to spin through the lane, but lost the ball and Toronto scored easily on the fast break. He then attempted an open three-pointer and was blocked by Pascal Siakam, who then went down the court for a dunk to give the Raptors a 25-17 lead. Julius Randle attacked the rim and threw down a powerful jam, and then Fred VanVleet came right back with a pullup jumper to extend the Raptors’ lead to 12.

With the clock winding down, VanVleet hit Toronto’s seventh three of the quarter to give him 14 points as they led 37-22 after the first. The Knicks shot just 31.6 percent from the field and allowed the Raptors to shoot 63.6 percent, including 7-for-10 from three.

– Obi Toppin showed his shooting touch and made three straight three-pointers early in the second quarter to cut the Raptors’ lead to single-digits, 44-36. Toppin hit his fourth consecutive three, but Gary Trent Jr. came back with a huge dunk over Jericho Sims. Randle and Barrett hit back-to-back threes, and then Jalen Brunson turned it over and was called for a flagrant 1 foul (his third foul of the contest) on VanVleet, as the Raptors made it a 58-49 game with about two minutes left.

The Knicks outscored the Raptors 31-25 in the second, but still trailed at halftime, 62-53. New York turned things around defensively and held Toronto to just one made three-pointer in the quarter. Barrett led the Knicks with 15 points and Randle added in 14 of his own, while VanVleet paced the Raptors with 18 first-half points.

– Barrett and Brunson both hit threes early on in the third to keep it close. Sims used his size down low to dunk it in, and then Quentin Grimes buried a three to cut the lead to 72-68 and force the Raptors to call timeout. Randle found Evan Fournier for three to make it a two-point game, 83-81, with about two minutes left in the quarter. Brunson gave the Knicks a one-point lead with a side-step three from the top of the key. New York outscored Toronto 33-24 in the third to tie the Raptors, 86-86, heading into the fourth.

– After 13 first-half turnover for the Knicks, it took them until the fourth quarter to turn it over again, as a bad pass led to two Chris Boucher free throws to put the Raptors up 94-88. Barrett turned it over again, as Scottie Barnes tossed it up to Trent Jr. for an easy slam and the Raptors lead grew to 99-88. Fournier and Barrett hit threes to close the gap, but Trent Jr. made one from beyond the arc to make it a 10-point game. Toronto continued to out-hustle the Knicks and grew their lead to 112-96.

Brunson and Grimes made threes on two straight possessions to bring the Knicks within 10 with about three minutes left in the game. VanVleet nailed a deep three to ice the game and end any chances of a Knicks’ comeback. Toronto outscored New York 39-30 in the fourth.

– Barrett led the Knicks with 30 points on 10-for-18 shooting with seven rebounds and five assists. Randle had 23 points, 19 rebounds and eight assists, while Brunson finished with 21 points on 6-for-15 shooting. Toppin scored 14 off the bench in just 11 minutes, as he went 4-for-5 from three. Six Raptors scored in double-figures and three scored 24-or-more points, with VanVleet leading the way with 28.

The Knicks will return back to New York and take on Donovan Mitchell and the Cleveland Cavaliers on Tuesday at 7:30 p.m.