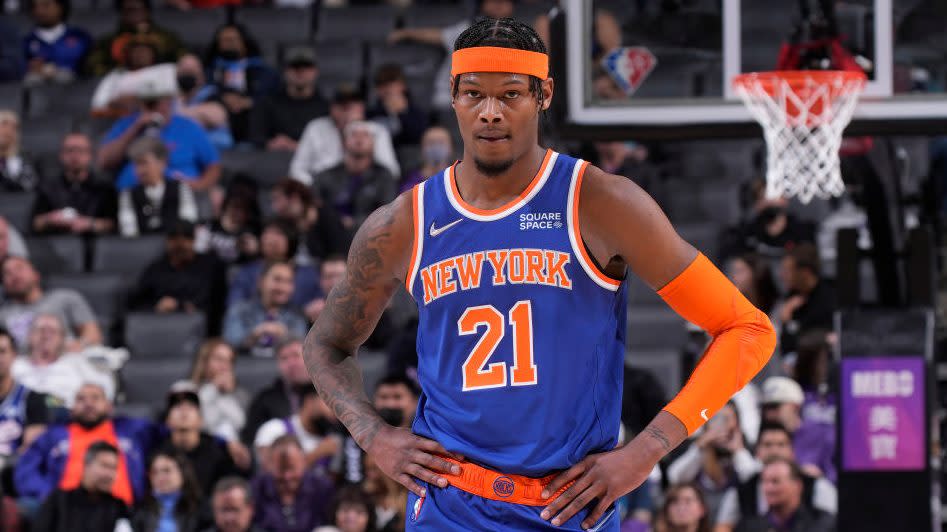 Cam Reddish couldn’t stand out amongst the crowded wing spot in Atlanta (De’Andre Hunter was the organizational favorite), so a trade to New York seemed like a chance to break out and establish himself next to college teammate RJ Barrett. Except Tom Thibodeau didn’t want Reddish and he ended up buried on the Knicks bench, too.

Reddish wants out of New York in search of a larger role, reports Marc Berman of the New York Post. The Lakers are lurking as a potential landing spot.

The Post has learned Reddish wants a change of scenery from New York after he was traded there in January and didn’t initially crack the rotation to build confidence. An NBA source said Reddish is looking for a larger role.

The Lakers have interest in the 6-foot-8 Reddish and could be part of a three-team deal with Mitchell. If they aren’t included, the Knicks could do a separate deal with Los Angeles, perhaps to recoup a first-round pick they lost in a Utah scenario…

“The Knicks didn’t have a plan for him,” the NBA source said. “They traded for him without one and still don’t have one. He would like a bigger opportunity somewhere.”

Especially with the now extended RJ Barrett likely out of the trade picture (it can still work with him, but it’s complicated by a poison pill in his contract), the Jazz are not overly concerned about what players come back to them in this trade (although they reportedly like Quentin Grimes). It’s all about the picks, particularly unprotected picks. That’s why the Jazz are rumored to be the ones pushing for the Lakers to be in a three-team trade, so the Lakers’ two picks (2027 and 2029), likely unprotected, could be paired with the Knicks picks (two unprotected, three protected) to get Utah more of what it wants. The Lakers could get a combination of Reddish, Bojan Bogdanovic, Malik Beasley and Jordan Clarkson back. Whether the Lakers want to give up two unprotected picks for those players (and moving on from Russell Westbrook) remains to be seen.

The Lakers are taking swings on promising but so far underperforming wings, having signed Lonnie Walker IV this offseason.

Another note worth mentioning: Reddish’s agent is Rich Paul, the agent of LeBron James and Anthony Davis.

Reddish to the Lakers may not happen, but it’s worth watching.

Here’s more on the Lakers