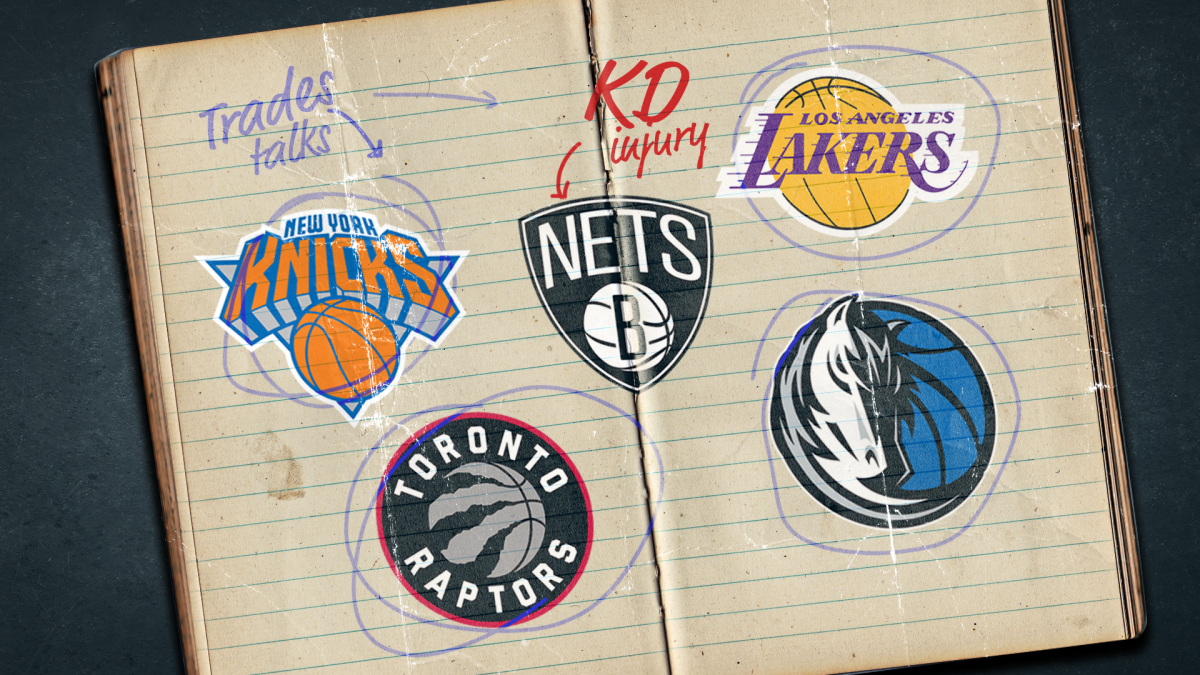 The NBA trade deadline is one month away, with rival NBA executives clamoring to see if the Raptors will make a trade to shake up their underwhelming season and if the Lakers will make a win-now move to aid LeBron James.

With that in mind, this week’s NBA notebook includes the latest trade intel on Cam Reddish, Immanuel Quickley, Tim Hardaway Jr, and Alec Burks from our own Michael Scotto. Plus, the latest trade rumors commentary on the Raptors and Lakers from our capologist Yossi Gozlan, a free agency stock watch from our Frank Urbina, and a look at how Kevin Durant’s injury will affect the Brooklyn Nets by Alberto De Roa.

The Cam Reddish era appears to be nearing an end roughly one year after New York traded a first-round pick to acquire the former Duke standout. Reddish hasn’t played in 18 games and counting for the Knicks as the team looks to find a new home for the former No. 10 overall pick.

The Knicks are willing to part with Reddish for two second-round picks, league sources told HoopsHype. The Lakers, Bucks, and other teams have inquired about the asking price for Reddish, who was shooting a career-high 44.9 percent from the field before being benched, HoopsHype has learned.

Another Knicks player whose name has circulated in the rumor mill this season is Immanuel Quickley. Several teams, including the Bucks, Mavericks, Wizards, and others, have expressed interest in Quickley, league sources told HoopsHype.

However, New York’s previously reported asking price of a first-round pick and Quickley’s improved play amid the loss of RJ Barrett may make it tough for a trade to come to fruition. Prior to facing the Bucks on Monday night, Quickley was averaging 19.1 points on 47.1 percent shooting and 4.4 assists, and 4.3 rebounds in his last 11 games.

Quickley has averaged 20.3 points, 5.3 assists, and 4.9 rebounds through eight games as a starter this season.

The Dallas Mavericks have made Tim Hardaway Jr. available, according to Marc Stein, and the Cleveland Cavaliers are interested in him per Chris Fedor.

Cleveland is open to upgrading the wing position via the trade market. However, Hardaway Jr. is owed $34.1 million the following two seasons, which gives Cleveland hesitancy, HoopsHype has learned. In addition, there’s also a belief Caris LeVert is a better overall player than Hardaway Jr.

The 31-year-old veteran has averaged 14 points on a career-high 46.4 percent from the field and 44.7 percent from beyond the arc.

Next season, Burks has a $10.49 million team option, which the Pistons are expected to exercise if he remains with the team past the trade deadline, given his strong play and veteran presence.

According to Marc Stein, the Raptors aren’t motivated to trade their top players unless they get strong offers. He cites Pascal Siakam and OG Anunoby, in particular, as players that would be tough for other teams to pry away. The insane trade market for star players last offseason has likely raised the bar for the types of returns the Raptors would demand for these players.

It wouldn’t be unreasonable for them to demand a haul of unprotected first-round picks similar to the pricetags of Rudy Gobert and Donovan Mitchell for Siakam. There are a handful of teams with a surplus of first-round picks positioned to make that type of deal. Anunoby won’t go for that type of haul, but he should have a strong market with two first-round picks feeling like a fair price point. He can be plugged into every other team in the league and instantly raise their ceiling.

Stein adds that the Raptors are open to parting ways with Gary Trent Jr., which other executives previously suggested to HoopsHype’s Michael Scotto at the G League Showcase in Las Vegas. As explained in the story several weeks ago, Trent Jr. seems like their most likely trade candidate because he has a player option that he’s expected to decline this offseason. Instead of giving him a raise, the Raptors could trade him for draft compensation and to clean up their books so they’ll have more flexibility to give Fred VanVleet a raise this offseason along with Siakam and Anunoby next offseason.

Many teams in the league can trade for Trent Jr. as a rental. The question is whether teams are willing to give up a premium for him and potentially pay him $20-plus million annually on his next deal. Teams projected to be over the cap this summer who could use backcourt help, like the Suns, Mavericks, and Wizards, could fit the criteria.

The Lakers are gleaming with optimism. They are winners of five of their last six, and Anthony Davis is reportedly ready to start ramping up for a return soon. The better they do, the more pressure there will be on the front office to make a trade to improve the team this season. LeBron James has already gone on the record over the weekend to echo that sentiment.

According to Stein, the Lakers feel that trading an unprotected first-round pick for Bojan Bogdanovic is too steep a price. And they’re probably right, given their circumstances. If they had a surplus of picks, it would make sense. However, they’re better off holding onto them for a more worthwhile return. If they don’t trade any of their two available first-round picks this season, they will be able to trade up to three during the offseason.

Their reluctance to trade any future first-round pick for a good starter suggests the front office doesn’t intend on trading any this season. The trade market isn’t particularly robust right now and trading far-out first-round picks is a risk for a team that isn’t guaranteed to make the playoffs and already having valuable outgoing picks. Time will tell if they change their stance if Davis comes back strong and they continue to win.

He may still frustrate from time to time with his shot selection, but at the same time, he is one of the most underrated wing defenders in the league, showing a ton of tenacity and effort on that end of the floor to go with his confident scoring. This has been the most impactful season of Dillon Brooks’ career by far, too, with the Grizzlies playing over 10 points per 100 possessions better with him on the floor. Brooks is in the final year of his contract and headed into unrestricted free agency, making $11.4 million this season, a number he will easily eclipse on his next contract.

Another shoot-first, ask-questions-later type of player, Malik Beasley, is a more reliable outside shooter than Brooks but not the same level of defender. Still, Beasley is posting a solid campaign for the surprisingly adept Jazz, leading the NBA in threes made off the bench (116), with Utah owning a team option on his contract worth $16.5 million. Beasley previously told our own Michael Scotto that he wants the Jazz to pick up that option in an interview with HoopsHype earlier this season.

Though the Kings are enjoying their best season in quite a long time, the same cannot be said for Harrison Barnes, who’s posting his lowest point-per-game total (14.5) since the 2019-20 season while shooting a career-low 33.9 percent from three. It’s an ill-timed down year for Barnes, who will be an unrestricted free agent this summer, coming off a 2022-23 season that will earn him $18.35 million. Hopefully, for Barnes, his 30-point performance against Orlando, which marked a season-high scoring output, is a sign of him turning it around for the better.

With the Clippers struggling mightily of late, it’s unclear if Reggie Jackson will even finish the season with the team, as Los Angeles seeking to trade the shoot-first point guard would not be totally farfetched – not with how poorly Jackson has played lately. Over the Clippers’ last six games – all losses –  Jackson has averaged 5.7 points on 30.2 percent shooting, even losing his starting job and seeing the floor for all of seven minutes and 40 seconds in Los Angeles’ latest defeat. Jackson will be an unrestricted free agent this summer, one who should still attract interest from point guard-needy teams –  he just doesn’t appear in line to land a multi-year contract of any big value.

How Kevin Durant’s injury will affect the Nets

Looking for good vibrations in Brooklyn hasn’t been an easy task in recent times. Scandals, injuries, trade requests and public turmoil have been a staple since Kevin Durant and Kyrie Irving landed with the Nets. The closest thing to happiness happened in the last 20 games. With Irving back in the fold and Jacque Vaughn established as the new leader on the court, the promised land looked closer than ever for this restless franchise.

Since November 27, Brooklyn rolled with a league-best 18-2 record, tying for best offense in the league with the Nuggets while shooting an insane 60.3% in effective field goal percentage. In fact, the Nets would currently be the best shooting team ever in a season (58.4 effective field goal percentage). But most importantly, Vaughn has built one of the strongest defenses in the league. Only Grizzlies, Cavaliers and Knicks had a better defensive percentage since the start of the Nets’ 20-game run.

In a league deep in offensive talent, no one has been more important than Durant. At age 34 and after overcoming a torn Achilles, we have enjoyed one of the finest versions of the future Hall of Famer. Scoring almost 30 points per game, he’s setting career-highs in field goal (55.9 percent) and free throw percentage (a league-best 93.4 percent). His mid-range game is an absolute beauty, making 57.1 percent of his shots on 7.0 attempts per game. In the 21st century, only Dirk Nowitzki has finished a season over 50 percent from mid-range with at least seven attempts. No one has shot better than 53 percent… till now.

But then, Durant got injured with a right MCL sprain. A very similar injury to the one that sidelined him last season, though at least with an expected shorter recovery time.

During the 2021-22 season, Durant’s injury was a painful inflection point. The Nets went from legit contenders for the Eastern Conference No. 1 spot, only half a win behind the leading Bulls, to having to compete for their lives in the play-in Tournament. With KD away, they were the worst team in assist percentage (only 55.7 percent of their shots came after an assist). Trading James Harden in February for an inactive Ben Simmons ended any chance for an elite playmaker to solve the problem.

And on top of that, the team, still coached by Steve Nash, became the third-worst defensive team in the NBA while Durant was out, only behind the lottery-bound Rockets and Pacers. The result: a catastrophic 5-16 record that ended any chance of a top seed in the playoffs and, eventually, a quick first-round exit.

Could this year be different? Well. there are reasons to be optimistic.

It’s impossible to emphasize enough how good and motivated the defense looks compared to last season. Nic Claxton, averaging a league-best 2.6 blocks per game, has exploded as one of the best rim protectors in the league. Newcomer role-players like Royce O’Neale, Yuta Watanabe, and Edmond Sumner are bringing some defensive grittiness Brooklyn didn’t have last year. And for all his offensive struggles, Simmons’ versatility on the defensive end has provided a perfect balance for the team.

It’s inevitable the Nets will be a worse offensive team without Durant. Without him on the court, Brooklyn has a 108.0 offensive rating in 2022-23, which only would be good for the 29th-best in the league. The team will have to rely more on a more well-covered Irving and on the inconsistent playmaking of Simmons. And the great assortment of elite shooters the Nets have will enjoy less space to find shots. It’s all on Vaughn and his defensive scheme. If he succeeds in the next few weeks, Brooklyn can finally believe again.