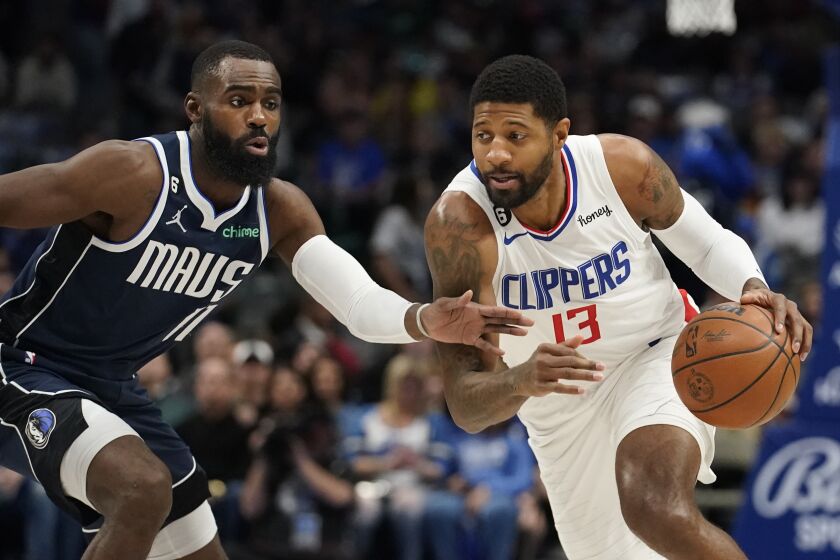 The Clippers left for this three-game road trip looking listless, losers of nine of their last 12, a preseason title contender suddenly contending for the play-in tournament.

They will return having received a jolt of energy after consecutive victories in Texas in which their offensive found direction and their defense found stops against one of the NBA’s most talented offenses.

With Paul George acting as the team’s de facto point guard in a new role and Kawhi Leonard scoring 30 points — his seventh consecutive game with at least 24 points — the Clippers edged above .500 with a dominant fourth-quarter showing to beat Dallas 112-98 at American Airlines Center.

Two nights after Leonard and George combined for 52 points and 19 assists to win a defense-optional game in San Antonio, Leonard and George came alive in the second half for 21 points. George’s barrage of drives into the paint to open the second half sparked a quarter in which the Clippers outscored the Mavericks by five, and set up a final quarter when they outscored Dallas 33-19.

After watching San Antonio get anywhere it wanted offensively Friday, the Clippers (25-24) allowed Dallas only 79 points through three quarters and never allowed superstar Luka Doncic — who owns nine career games of 40-plus points against the Clippers, the most of any active player against a single opponent — to get comfortable.

Doncic scored 29 points but needed 21 shots and missed five of his 13 free throws. Dallas shot just 15 of 26 on free throws, a display that was in stark contrast to the Clippers’ 30-31 free-throw shooting.

George was not without his blemishes while playing as the lead ballhandler, his five turnovers five more than he had Friday. His four first-half shots tied his season low for shots taken in any half, and though foul trouble essentially halved his first-quarter minutes, he still played 16 minutes before halftime. Perhaps it was not a coincidence, then, that 39 seconds into the third quarter George dribbled into the paint and shot a floater, which he made. On the next two possessions he reached the paint as well, mirroring the intent to attack that made him so effective against the Spurs, when nine of his 12 assists followed George getting to the paint or driving near it.

“Huge for us,” coach Tyronn Lue said. “And that’s how we need him to play.”

So was a third-quarter sequence that forced Dallas coach Jason Kidd to take a timeout: When George intercepted a Doncic pass intended for the corner, he spun and immediately looked upcourt, finding Leonard for a cross-court pass in stride that Leonard turned into a layup and a five-point Clippers lead.

Two possessions later, George ended his drive to the rim by crashing into Mavericks big man Dwight Powell, drawing a foul and a three-point play.