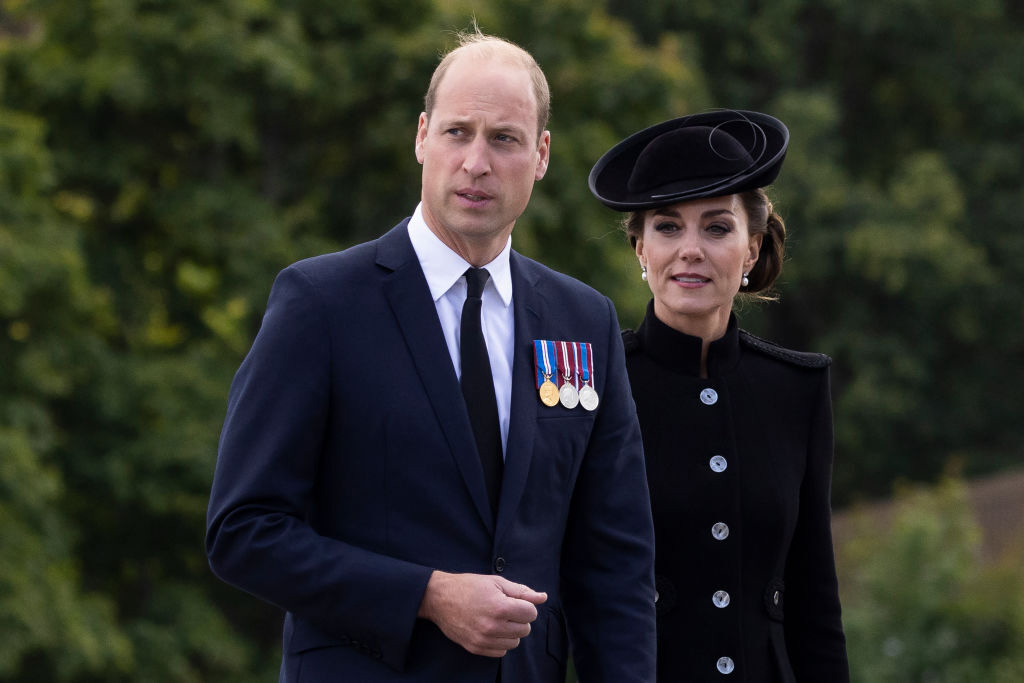 Kate Middleton and her husband, Prince William, visited the troops at the Army Training Centre Pirbright today in Wales.

Following the mourning tradition, Middleton was clad in an all-black dress featuring a structured Alexander McQueen overcoat with sharp shoulders and silver buttons that ran down the front of the garment, closing the fabric up. Her skirt was a pencil style with a slight slit in the back allowing Middleton to move freely.

The public figure wore sheer black tights under her dress to offer her an extra layer and accessorized with a geometric hat with a swirling fascinator adorning it by Philip Treacy. Middleton carried a black Mulberry clutch with gold hardware and stepped into classic black pumps.

To honor Prince William’s late grandmother, Middleton wore pearl and diamond earrings from Queen Elizabeth II’s vault. Wearing pearls is part of the mourning tradition in the UK that dates to the 19th century. When Prince Albert died in 1861, his wife, Queen Victoria, spent the rest of her life wearing only black. However, she would occasionally have a piece of jewelry, almost always a pearl necklace.

See also  Rihanna On Forbes’ 100 Most Powerful Women List With $1.4B Net Worth – Footwear News

White pearls are considered to denote purity and represent tears. In 1878, to mourn the loss of both her daughter Princess Alice and son Prince Albert, Queen Victoria wore brooches with their initials and a single white pearl.

William joined his wife in a dark blue two-piece suit that he wore with a crisp white button-up top and a black tie. The Prince accompanied the outfit with black shiny dress shoes.

Buckingham Palace stated that the Queen’s state funeral will take place on Sept. 19 at 11 a.m. The Queen will lie in state in Westminster Hall for four days to allow the public to pay their respects.