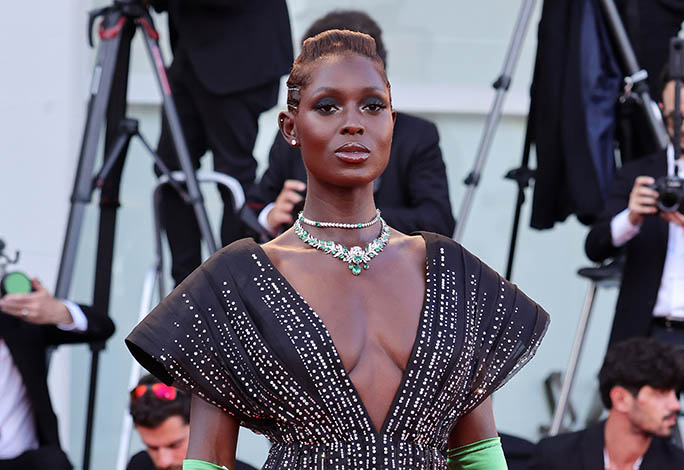 Jodie Turner-Smith made a fashionable appearance at the 79th Venice International Film Festival premiere of “White Noise” in Venice, Italy on Wednesday. The festival, which officially kicked off today, is known for its reverence towards both the worlds of cinema and fashion — and Smith is clearly dressing for the part.

Smith sparkled on the red carpet at the opening ceremony in a black gown. The top of the garment was adorned with sequins throughout and had a deep plunging V-neckline with pointy short sleeves and ruffled hem. While the bottom half featured a sheer skirt with streamlined crystals and pleated red hem.

To amp up the glam, the “Queen & Slim” actress accessorized with diamond stud earrings, layered choker necklaces and neon green opera gloves. Smith’s short tresses were slicked back off her face and two hairpins on the side. For glam, she went with a shimmering silver smokey eye and neutral glossy pout.

The “After Yang” star took an edgy approach to footwear and rounded out the look with black thigh-high boots. The shoe style peaked out underneath the sheer trim of her dress and appeared to have a slouchy silhouette.

The 79th Venice International Film Festival previews upcoming films, with top Golden Lion awards heralded as predictors for the following Academy Awards. The 2022 ceremony, hosted by Rocio Munoz Morales, will run from August 31—September 10, with top contenders including “Blonde,” “White Noise,” “Bones and All” and “Don’t Worry Darling.” This year’s jury will be chaired by Julianne Moore, who is joined on the panel by Mariano Cohn, Leonardo di Costanzo, Audrey Diwan, Leila Hatami, Kazuo Ishiguro and Rodrigo Sorogoyen.