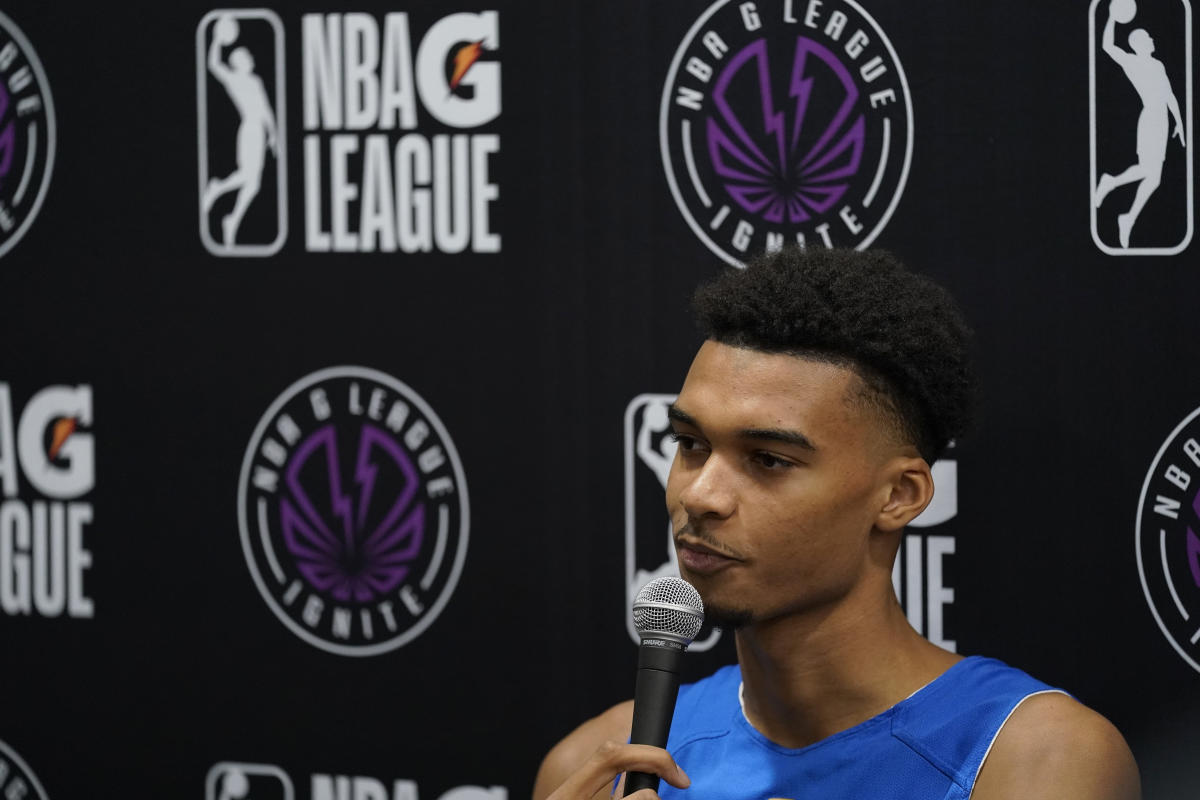 LAS VEGAS (AP) Victor Wembanyama and Scoot Henderson have been linked constantly over the last couple years, with just about every prognosticator anointing them as the top two picks in the 2023 NBA draft.

Thing is, they don’t know each other.

That’s about to change. Wembanyama – he’s listed at 7-foot-2, some say he’s 7-foot-4 – and the Paris-based club Metropolitans 92 are in Las Vegas to take on Henderson and the G League Ignite in a pair of exhibitions, the first on Tuesday and the second on Thursday.

”We’re playing against an NBA team, with NBA rules, on an NBA court,” Wembanyama said Monday. ”This is really going to be a first for me. I’m curious to know how it’s going to go. I know it’s going to go well, but I’m still curious.”

Victor vs. Scoot. Scoot vs. Victor. They’re not playing 1-on-1, but they are the clear headliners and the reasons why these first-of-their-kind games were put together.

Wembanyama is listed as a center but plays all over the floor with guard skills in a big-man frame; Henderson is a point guard who has been getting tons of attention for years.

”Out of all the prospects I’ve heard about in our class, I think he’s my favorite one,” Wembanyama said. ”I think he’s the most reliable that I’ve seen. He’s really a great player. If I was never born, I think he would deserve the first spot.”

Henderson – a five-star recruit from Georgia who signed with the Ignite last year and played in 10 games – sees these two games as an opportunity, downplaying the 1-on-1 storyline.

”People always try to compare and contrast whoever. I don’t look at it like that,” Henderson said. ”I look at it as two good ballplayers.”

The Ignite program exists to develop young prospects in preparation for the NBA Draft, mixing them with veteran talent to help guide them along the way. It has featured three eventual top-10 picks – Jalen Green and Jonathan Kuminga last year, Dyson Daniels this year – in its first two seasons.

Henderson is a huge draw for the Ignite this year. The Ignite also have Shareef O’Neal, the son of Shaquille O’Neal. But much of what the Ignite would ordinarily be doing right now would be barely noticed nationally; hence, the games against Wembanyama were put together.

The Los Angeles Lakers are playing in Las Vegas this week, a pair of preseason matchups against Phoenix and Minnesota. Wembanyama is going to those as a fan; he’ll have a slightly different view of NBA games next season.

”He’s one of those type of players, honestly, where you say like there’ll never be like another Shaq or there’ll never be another that,” Ignite coach Jason Hart said. ”He’s that. You’ll never see another one of those. The scouting report on him is tough. … I’m honored that I’m getting to play him at 18, because at 24, he’s going to be something different.”

Wembanyama has been a pro for three seasons already, spending last season with ASVEL in France – a club owned by San Antonio Spurs legend Tony Parker. He made the decision this year to join Metropolitans in part to be coached by Vincent Collet, who also coaches the French national team.

Collet is welcoming the chance.

”I think he’s the best prospect we’ve ever had in our league,” Collet said. ”He’s amazing, not only by his size, but incredible skills. Despite that, he still needs to learn the game. He’s very young. … We will try to give him this experience. That’s the deal we have together, him and me. We want to give him the experience before he gets to the league. It’s most important to get him ready for what will follow next year.”