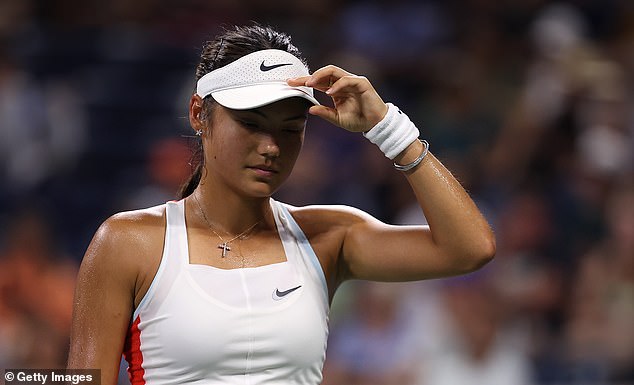 Following her first round win at the 2021 US Open Emma Raducanu spoke of her goggle-eyed enjoyment of New York City, and how she was loving the ‘free swing’ life was giving her.

You could hardly help contrast that with the joyless post-mortem that followed Tuesday night’s exit, twelve months on.

The peak of her sponsored cap was pulled well forward to help shield the pain in her eyes. She had lost, albeit to an excellent performance from the racket of Alize Cornet, and it was hurting.

Three decades ago Pete Sampras failed to defend the US Open title he had won as a 19 year-old and, in similar vein, he described it as like having ‘a monkey off my back’.

We know what happened next. Three summers later the Californian resumed winning Grand Slams, capturing his first Wimbledon, and by the time he was done he had collected fourteen Majors.

Raducanu used parallel terminology after her 6-3 6-3 defeat. She is not the generational talent that Sampras was, but she should not despair. Even Serena Williams took an equivalent length of time before following up on her first big breakthrough.

The question now is where Raducanu ends up on the scale, remotely near those two or much closer to the likes of Jelena Ostapenko and Bianca Andreescu.

They are among the more random Grand Slam winners that women’s tennis has thrown up in the past six years, and have struggled to replicate that initial success. 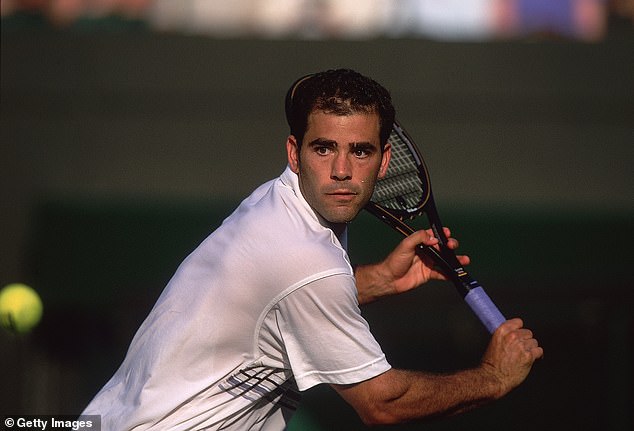 Given the scale of her 2021 story, and the fact that she comes from Wimbledon’s host nation, Raducanu will be subject to more analysis than either of them.

It followed fast on Tuesday, and some of the most pertinent came in from seven-times Major winner Mats Wilander.

‘Emma is good but she’s not great,’ he told Eurosport. ‘She had a lot of confidence last year, and she is a fighter, and she plays well. The only thing I don’t know is, I feel like she hasn’t quite found her identity as a player.

‘Is she a bit of a risk taker? Does she play really aggressively? Or does she use her movement skills, dial back a bit and play with variation?

‘She’s good at everything, but doesn’t quite have the killer shot. I haven’t seen her path.’ 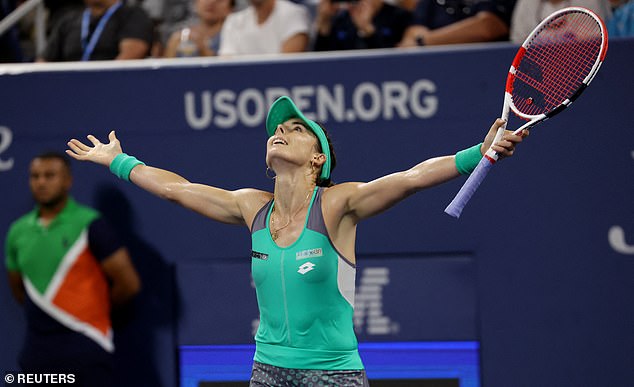 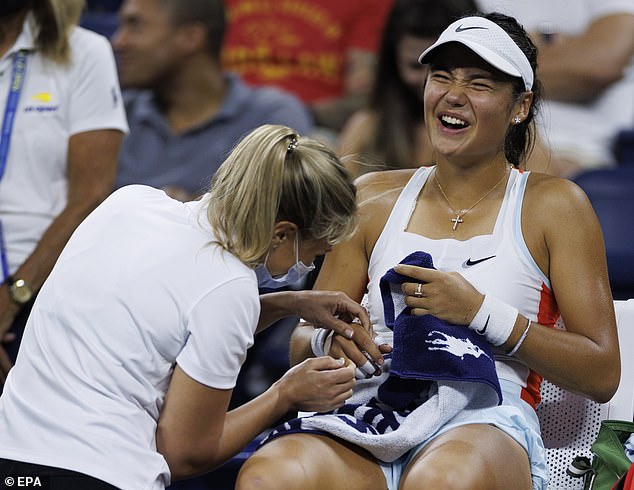 Yet it is not easy to get a clear sense of direction when there is so much flux around you, and that has been the case for Raducanu these past twelve months.

There is no playbook for what happened in 2021, but the setup around her has been a mess, with the policy of mixing and matching coaches not working. This has been exacerbated by the lack of a steady health and conditioning team when, understandably, she had plenty of ground to make up in that area after the admirable distraction of completing her education.

On Tuesday night she dodged an inquiry about whether she will continue with US-based Russian coach Dmitry Tursunov going forward.

There have been a few promising signs that the partnership might bear fruit. However, in a symptomatic complication, there are questions about how available he will be in a sport which constantly crosses territories. 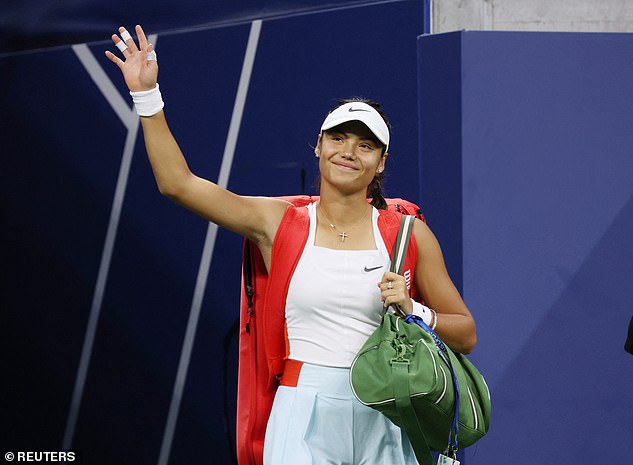 Only this week the European Union is involved in discussions about severely curtailing the visas being handed out to Russians (something that could yet have a profound effect on the whole sport).

In the immediate future she needs to decide what tournaments to play, with her ranking now settling around a slightly unflattering 80 after this fortnight.

That makes a difference in that it will not gain automatic entry to every tournament.

As a past Grand Slam winner she will nonetheless have the advantage of seeking wildcards to whatever tournament she wishes to attend. Andy Murray has used a similar privilege in recent seasons on the men’s side as he tries to rebuild his ranking.

The Scot, however, is the finished article and can claim that his career has been ravaged by injury. 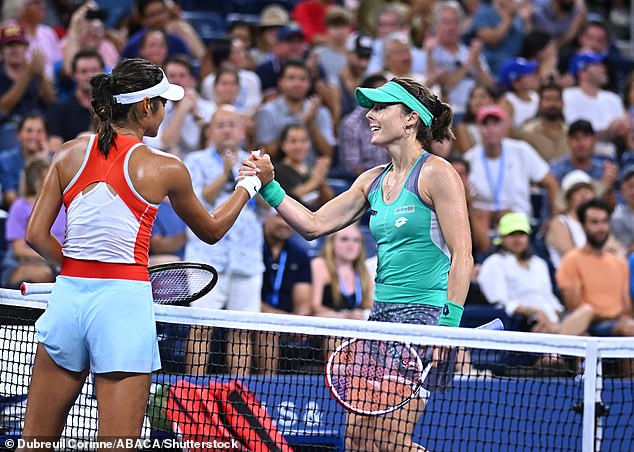 It would be better for Raducanu to drop down to lesser tournaments and learn the parts of her trade that she missed out on before the extraordinary, and vaguely surreal, surge of a year ago. She sounded open to that in the wake of Tuesday’s relegation.

Even then she will be unable to enjoy a rediscovered anonymity, partly due to the huge portfolio of blue chip endorsements that she and her advisers have signed up to. 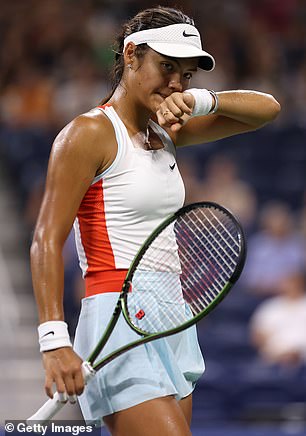 Raducanu possibly hinted at moving down to lesser tournaments

It is a highly unusual world number 80 who has so many of these to service, for all the insistence that they will not be allowed to interfere with the hard graft of her tennis.

They bring an additional pressure all of their own that she will need to cope with.

If the brands look at her now diminished status with a sense of buyers’ remorse then they only have themselves to blame. Anyone with knowledge could have told them that it would be impossible for her to sustain 2021, and that she would be in for two years of hard learnings.

Ultimately Raducanu will have to figure a lot of this out for herself, and therein lies another potential complication.

There is a process in tennis, beneath the surface, whereby there comes a point when the player feels they want to take more control of decision-making.

This can be an awkward transition, as it can involve taking power away from parents who are usually instrumental in getting someone to the heights in the first place. 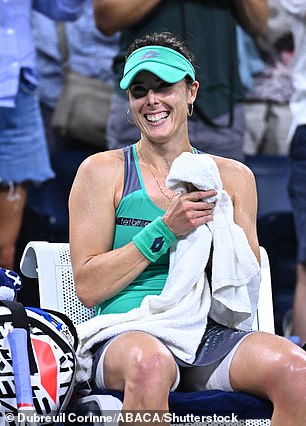 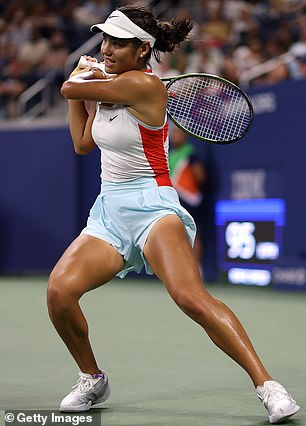 Smart and mature, Raducanu has a mind of her own. You wonder when she will start charting her own destiny in an especially unforgiving sport.

You hope for her that the days of having a ‘free swing’ will return. There will certainly be something of a release from here on for a player who remains exceptionally talented with excellent technique.

As one onlooker at Flushing Meadows, who has been close to her, remarked on Tuesday night: ‘She needs to get back to the point where she is hitting the ball again without thinking.’