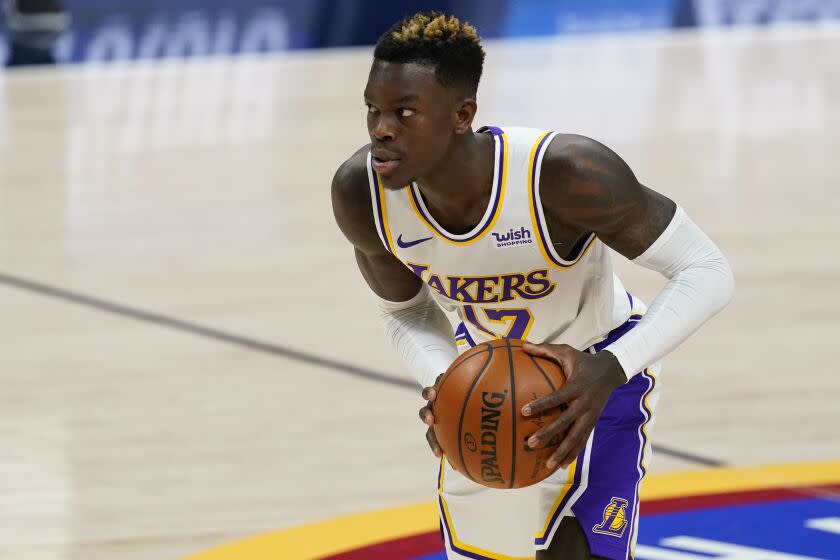 The Lakers are reuniting with another former member of the team, this time signing point guard Dennis Schroder on Friday. Schroder’s one-year contract with the team is for the veteran’s minimum, a person with knowledge of the deal not authorized to speak publicly told The Times.

Schroder, 28, turned down a lucrative contract extension with the Lakers during the 2020-21 season before leaving the organization the following summer in free agency. During that same time frame, of course, the Lakers traded for Russell Westbrook. After stops in Boston and Houston, he’s now back with the Lakers.

“This past year didn’t feel right,” Schroder wrote in an Instagram post. “I felt misunderstood & nobody really knew the story! I’m coming back to the biggest organization to make (expletive) right!”

The Lakers acquired Schroder for Danny Green and a first-round pick in 2020 and had serious contract extension discussions before Schroder turned down a deal worth more than $80 million. He signed with Boston on a one-year deal for $5.9 million before being dealt to Houston.

He left the Lakers as the team’s starting point guard only to return to a much different situation.

Despite a crowded backcourt that now includes Westbrook, Patrick Beverley, Kendrick Nunn, Austin Reaves and Lonnie Walker IV, Schroder provides the Lakers with a more natural playmaker whom, other than Westbrook, the group doesn’t really have. And while Westbrook deals are still being discussed, people with knowledge of the situation not authorized to speak publicly told The Times the Schroder signing isn’t necessarily a precursor to another move.

The Utah Jazz, who have significant role players on short-term deals, seems like the most logical place for the team to look for a trade, though the Lakers remain hesitant to sacrifice significant draft capital for marginal improvement while also clinging to as much cap space as possible next summer.

Sources familiar with the decision to add Schroder said his attitude this summer playing for the German national team in the European championships, where he’s averaged more than 21 points and seven assists, made the Lakers comfortable with bringing him back into the organization. Multiple sources cited the success Dwight Howard had with the 2019-20 championship team as an example of a player’s successful return to the organization with a new approach they hope can be mirrored with Schroder.

Schroder has a prior relationship with Darvin Ham, who was an assistant with the Atlanta Hawks when Schroder began his NBA career. He also played alongside Westbrook in Oklahoma City.

While the desire for the organization to take some big swing this summer to try and maximize its chances with LeBron James entering his 20th season strongly exists within its fan base, the team has been more conservative than many expected in its handling of the offseason. Outside of the brief exploration of trying to land Kyrie Irving — a possibility that, for now, dried up with Kevin Durant’s reconciliation with the Nets organization — the Lakers have held tightly to first-round picks in 2027 and 2029, the two primary means they have to improve the roster.

Sources said the Lakers hope to use Beverley as a defender against top-level wings, while using a player like Schroder to chase high-movement point guards such as Ja Morant and Stephen Curry. The team, though, will undoubtedly have to use small lineups as currently constructed.

Despite the impression that the team needed to deal Westbrook this offseason, the Lakers have done their best to project a level of comfort with keeping him with the organization for a second season. With Westbrook owed more than $47 million this season and coming off a season during which he and the Lakers struggled, interest in trading for the former MVP has been very limited, with teams demanding additional draft picks in compensation.

Adding Schroder, one of, if not the most talented remaining free agents, gives the Lakers an added layer of security whether the team trades Westbrook or is forced to face the very real health concerns that exist with Beverley and Nunn, who missed all of last season with a knee injury. And if the team is able to make a Westbrook trade, it doesn’t necessarily need to add playmaking because of Schroder’s presence on the roster.

The team will gather for a player-organized mini-camp in San Diego next week before training camp opens during the last week in September.