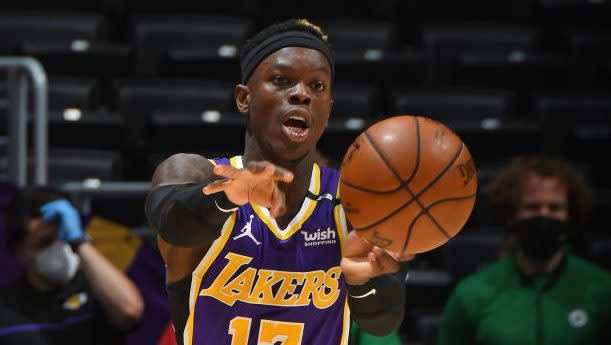 Dennis Schroder is back with the Lakers.

That pairing didn’t go well in the 2020-21 season, when he played 32 minutes a night as a starter (and frustrated Anthony Davis with his lack of passing), but the Lakers are betting it works more smoothly with him in a smaller, more defined role this time around. The Lakers and Schroder have reached a deal, something reported first by Marc Stein and confirmed by Shams Charania of The Athletic.

The only contract the Lakers could offer is a veteran minimum ($2.6 million). It’s not the $84.4 million extension he turned down from the Lakers back in 2020 thinking there was a better deal out on the open market, only to find out he should not have bet on himself (he ended up signing with the Celtics for the taxpayer mid-level exception).

He joins a Lakers team where Kendrick Nunn and Russell Westbrook — both technically point guards — will likely start, with Patrick Beverley coming off the bench (to open the season, how long Westbrook plays a role and remains a starter is one of the big question marks in Los Angeles). Considering how much time Nunn and Beverley have missed in recent seasons with injuries, adding a solid veteran guard into the rotation makes sense. And Schroder is versatile enough to play alongside Westbrook, Nunn or LeBron James (who is the defacto point guard of this team).

Schroder is coming off a EuroBasket where he played well and led Germany to the semi-finals (Spain eliminated them on Friday). Schroder scored 30 points and had eight assists in the elimination game, but it was not enough.

Schroder averaged 13.5 points a game last season, starting in Boston and getting traded to Houston. Schroder was given a bigger role in his first stint with the Lakers (and to start last season in Boston), and he has not thrived in that situation. Nevertheless, Schroder is a rotation point guard who can pass, shoot the three well enough (34.4% last season), and give a team a decent 15 minutes a night, and as long as that’s all the Lakers ask of him things can work out better this time around.

It’s not a signing that moves the needle for the Lakers, but it’s not a bad one.

Check out more on the Lakers

‘Showtime’ Lakers reunite for one more practice, few days in… LeBron says NBA “definitely got this wrong” with Sarver; Adam… Shaq calls Dennis Rodman the worst teammate he ever had