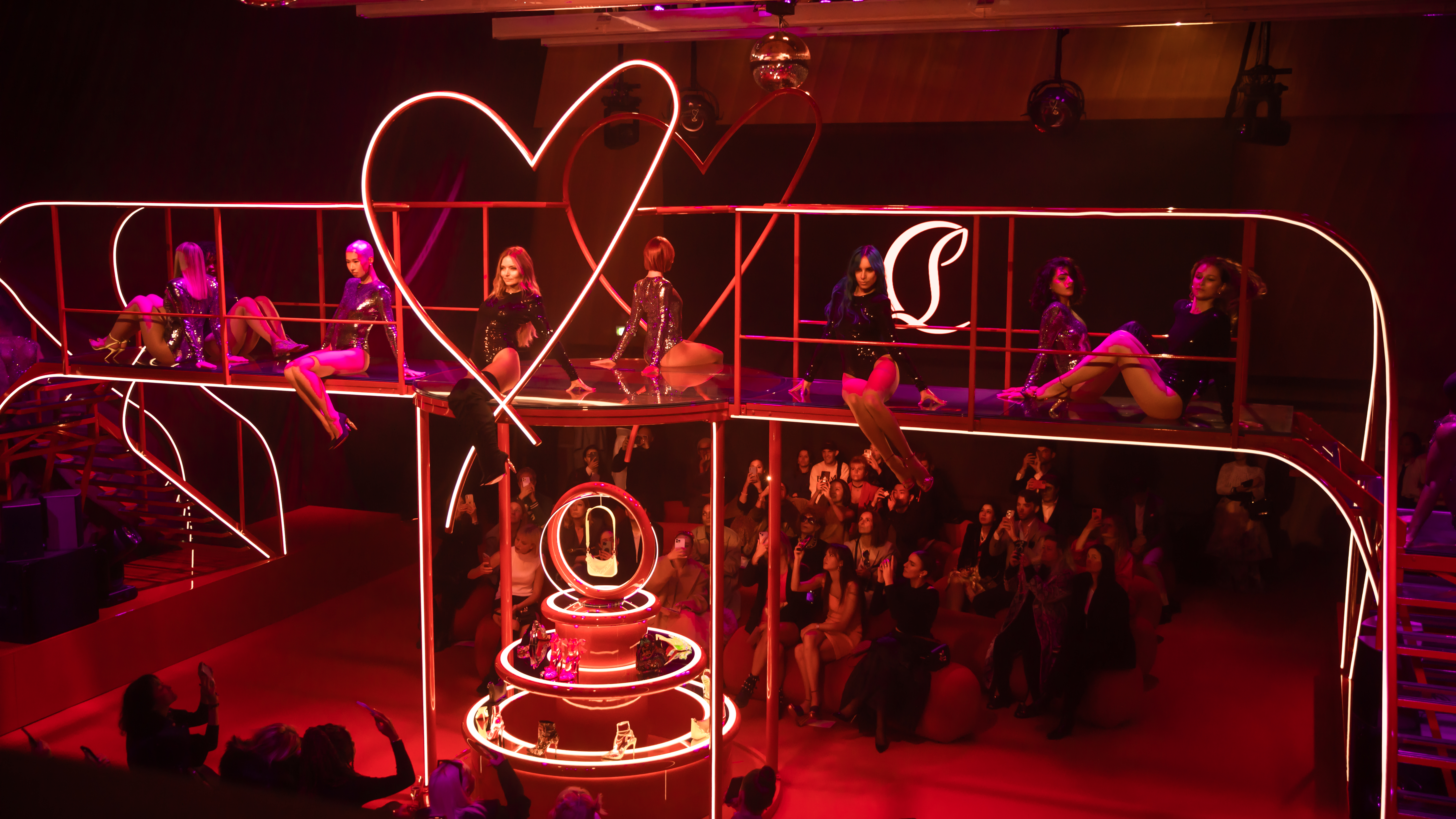 It was a feat only Mr. Louboutin could pull off.

While other designers were getting back into the swing of Paris Fashion Week returning to well-worn venues, Christian Louboutin took things up a few notches — or a few hundred feet, to be more accurate. The French designer held his spring summer ’23 collection presentation atop the Eiffel Tower for an event that was quintessentially Louboutin in showmanship, drama and performance. It was also très français.

Once guests arrived to the first level of the tower, they were escorted into the private Gustave Eiffel room decked out in plush red seating and a catwalk abridging the ceiling, where a troupe of dancers began to perform (wearing Louboutin heels, naturally, including male dancers who sported pairs of the designer’s Our Angels unisex platform boots).

“I’ve always been fascinated by dancers and people on stage,” Louboutin remarked in the show notes for the collection and Loubi Show event, which was the second iteration of the designer’s performance series. “These women performing in marvelous costumes, standing in heels, going down vertiginous stairs with inexpressable elegance.”

Louboutin’s dancers lived up to his vision, and after the troupe performed while traversing the metal stairs and catwalk, curtains moved back to reveal the daylight and the city views that have made the Eiffel Tower so famous. The light also revealed the collection, which was divided into a handful of vignettes. First a studded series, where Louboutin continued to explore how his famous motif done in tone on tone pastel, while other pastels and simple black leather decorated puffy leather mules.

Then came a series of more opulent heels riffing on the lipstick heels that the designer introduced last season. This time, the “Lipstrass” heel was covered in crystals, making for a statement shoe that is sure to be one of the most sought after for collectors. Accompanying the lipstick heels was bag decorated entirely in crystals, another solid collectible for next season.

Next, a few look-at-me styles in Louboutin’s Fluo series, in neon pink and yellow, with tonal floral motifs decorating the toes, plus buckle heels and a Barbiecore handbag (the “Loubila”) with matching chain link handle.

Finally, a series of black suede heels done in intricate crystal decoration showcased both craftsmanship and showmanship, the perfect heel for the event’s final performance of the day, which featured the French pop singer Vendredi Sur Mer, whose songs accompanied the entire choreography of the show.