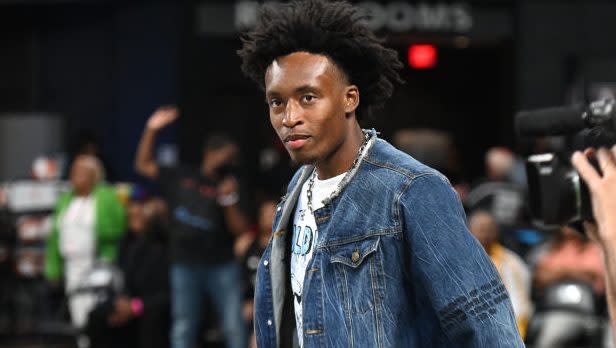 The initial reaction around the league in the wake of the surprising Donovan Mitchell trade to the Cavaliers was that Lauri Markkanen might want to rent, not buy, in Salt Lake City — the Jazz are expected to flip him by the deadline to another team.

Collin Sexton, on the other hand, may be sticking around. He signed a four-year, $72 million contract extension to make the trade work, reports Shams Charania of The Athletic. The contract is fully guaranteed.

“I checked in, because I wondered could they reroute Collin Sexton? Maybe to the Lakers, for example. But I was told no, that Sexton’s gonna be in Utah. At least that’s the plan.”

That $72 million extension is a fair number. Sexton wanted more (north of $80 million total) based on his last healthy season, two years ago, when he averaged 24.3 points per game. However, he did miss all but 11 games last season due to a torn meniscus that required surgery. Up against the luxury tax at the time, Cleveland only offered Sexton a three-year, $40 million contract. The $72 million splits the difference.

The Jazz — who are still likely to trade away veterans Bojan Bogdanovic, Mike Conley and Malik Beasley before the season starts — need someone to handle the ball and take some shots, and it looks like Sexton will get that chance. Eventually he might be traded, he’s not part of the long-term plan in Utah, but for now the Jazz and Sexton are a match.

Check out more on the Jazz

Report: Cavaliers plan to hold on to Collin Sexton, not flip him after trade originally appeared on NBCSports.com