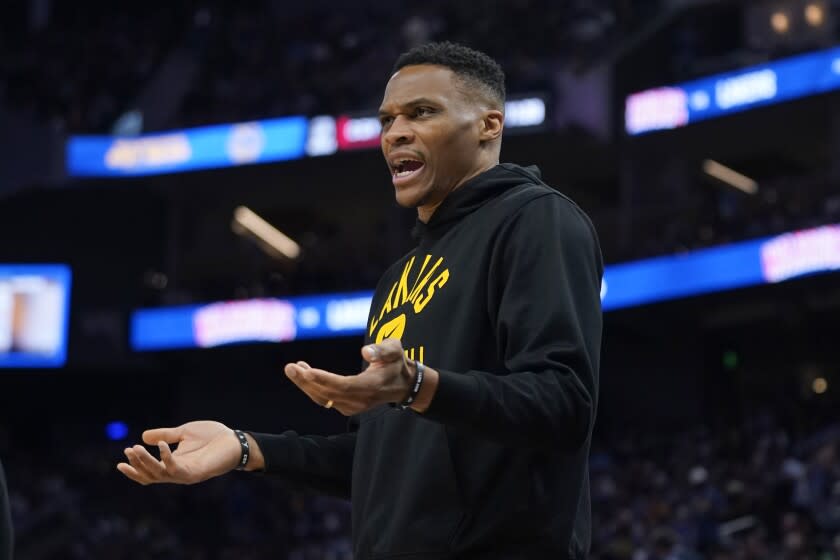 Maybe someday there will be a clear-eyed explanation for why the Lakers decided to push in for Russell Westbrook, to trust their stars’ desires for another All-NBA type instead of a more minor alteration in the form of Buddy Hield.

It’s all sort of irrelevant now as the Lakers stare a massive decision in the face. Do the Lakers really want to come into training camp with Westbrook on their team or are they willing to pay a steep cost to try and undo it?

In conversations with executives from rival teams in both conferences, it’s clear what the cost for any deal is going to be. It’ll take at least one first-round pick to park Westbrook somewhere and a second first-round pick to bring back multiple rotation pieces, sources with knowledge of the situation not authorized to speak publicly said. Those prices could rise (possibly with pick swaps) or lower (bad contracts coming back to the Lakers) depending on variables.

One of those variables, Donovan Mitchell’s status with the Utah Jazz, removed itself on Thursday when the Jazz reportedly swung a surprise deal with the Cleveland Cavaliers, sending Mitchell to LeBron James’ old team for a trio of young players and first-round picks.

It formalized what many around the NBA have viewed as the two most viable paths for the Lakers to improve now. Either the Lakers up their offers in pursuit of a trade centered on Myles Turner and Hield in Indiana or they turn their sights back to the Jazz to try and pick the bones of a former contender thrust into a rebuild.

A deal with the Jazz and the Lakers can make a lot of sense for both parties.

The teams have already worked together this offseason on the Patrick Beverley-Talen Horton-Tucker deal. The Lakers have future draft assets and a need for more quality role players, which makes the Jazz seem like the right spot to look for a redo on the Westbrook trade.

(Why didn’t the teams knock this out earlier? Utah needed to keep flexibility in any possible Mitchell deal. Now that it’s done, they can offload other parts).

The conversation, at least from the Lakers’ end, should probably start with 33-year-old small forward Bojan Bogdanovic. During the last three seasons in Utah, Bogdanovic has been a capable second scoring option, averaging 18.4 points while hitting 44.7% from the field and 49.7% from three. He’s been one of the NBA’s most durable players since arriving in the NBA in 2014 and, at 6-foot-7, he fits a positional need at small forward.

He’s not a high-level defender, but Bogdanovic is the kind of shooter who should create better driving lanes for James and Anthony Davis and give the team more offensive balance.

The Jazz, though, could look to offload Bogdanovic — who has one year at $19.55 million left on his contract — to another contender in the market for wing shooting (because really, almost everyone is looking for that). And a separate Bogdanovic trade could yield the Jazz a projected late first-round pick instead of being a part of some larger bundle.

See also  What do Boston Celtics stars Jaylen Brown and Jayson Tatum need to do to succeed this season in the absence of Ime Udoka?

Utah could also ask for two firsts from the Lakers and let them build a deal of who they want.

That bundle, with or without Bogdanovic, could include players such as Mike Conley, Jordan Clarkson and Malik Beasley, who Utah got as part of the Rudy Gobert deal with Minnesota earlier this summer.

Though those pieces aren’t the most natural fits — the Lakers already probably have too many guards — there are some real talent upgrades there.

Conley, who will make more than $22 million this season and $24 million next, saw a dip in his production in his 15th season last year. Soon to be 35, Conley averaged 13.7 points and 5.3 assists, though he hit more than 40% from three for the second-straight season.

Clarkson, who is no stranger to the Lakers, also has two years left on his contract.

After winning the NBA’s sixth man of the year award in 2021, Clarkson struggled from deep last season, making only 31.8% on 7.6 attempts from three a game.

In some ways, Beasley is a similar player — albeit younger than Clarkson. He, too, is a high-volume three-point shooter though much more efficient than Clarkson. Beasley hit 37.7% last season but struggled inside the arc, making 39.1%. Neither is regarded as much of a playmaker for others, but either would be a welcome on-the-ball scorer with Beasley’s shooting and youth probably making him the better fit.

The question, as always, remains the cost.

The Lakers have hesitated to trade their 2027 and 2029 first-round picks in any deal that doesn’t make them serious contenders for the next two seasons (when James is guaranteed to be under contract). Maybe Conley’s inclusion in a deal, considering the $24 million owed after this season, would allow for the Lakers to gather a small handful of top-tier rotation players for a final push with James. And maybe the Lakers could push for Jared Vanderbilt, a 23-year-old defense and rebounding specialist, who recently signed with Klutch Sports, as a sweetener in any deal where they’re sacrificing a future first.

See also  Is the Boston Celtics’ historic offense a sustainable one?

Also, the Lakers might still prefer a Hield-Turner trade costing two firsts than any bundle they’re able to cook up with the Jazz. There’s also been a long flirtation with former first-round pick Cam Reddish, who the team was linked to last season at the deadline and over this offseason.

Sources say the Lakers are comfortable heading into training camp with Westbrook on their roster, hoping new coach Darvin Ham can unlock increased intensity on defense while another season with James and Davis makes life easier on offense.

The argument for that, of course, is if the Lakers can’t build into a true contender via trade this month, wait and handle it down the road either through free agency or future trades. A bad deal now that forces them to offload one or two future firsts wouldn’t dramatically raise the ceiling on this year’s team and handcuff them even more down the road, sort of a worst-case scenario for the organization.

Still, it’s hard not to envision how redoing the Westbrook deal — sending out the former MVP for multiple playable pieces — wouldn’t make the Lakers better in the short term.

The question they’re mulling, though, is if any of the options facing them today make them good enough.