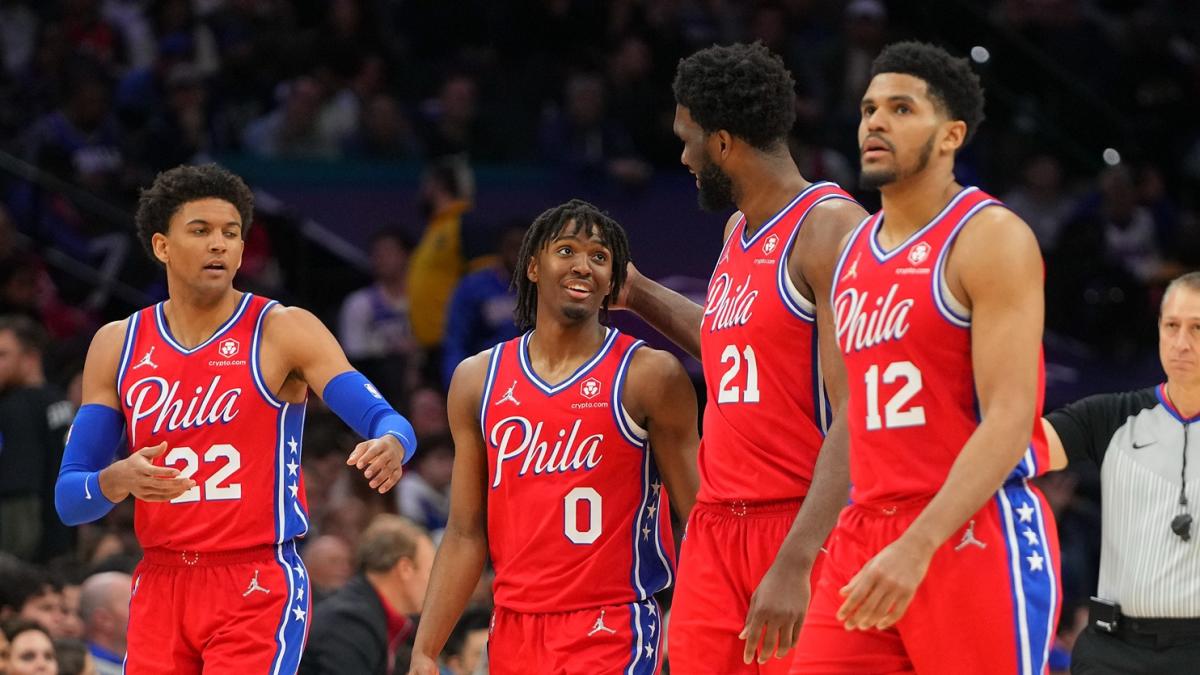 The 2022-23 Sixers will start their season on Sept. 27 in Charleston, South Carolina.

Before training camp begins, we’re looking at questions that will define the team’s season and ultimately determine whether the Sixers advance past the second round of the playoffs for the first time since 2001.

First up: Can the Sixers win the turnover battle?

Tyrese Maxey is not Jalen Hurts.

In almost every imaginable scenario, three or four ill-advised passes in a game would be a much bigger problem for the Eagles quarterback than the 21-year-old Sixers guard.

Still, possessions matter in the NBA playoffs. A significant turnover disadvantage doesn’t tend to bode well, and the Sixers were wary of that entering their first-round series last season against the Raptors.

“The three keys for us coming into this series were rebounding, turnovers, and guarding the ball — keeping it out of the paint,” head coach Doc Rivers said following a Game 5 loss in which the Sixers committed 16 turnovers and Toronto had just nine. “Today we rebounded well, we didn’t keep the ball out of the paint, and we didn’t take care of the ball. If they win two of three of those, it’s going to be hard for us to win.”

While 16 turnovers is a relatively high number, it’s also not outrageous or crushing. But, because of the Sixers’ decline in terms of forcing turnovers, every off-target James Harden high-low attempt and Joel Embiid miscue from the post felt weighty.

With Ben Simmons’ games played dropping from 58 to zero, the Sixers fell from third to 17th in defensive turnover percentage, according to Cleaning the Glass. Matisse Thybulle, Paul Reed and Andre Drummond were all in the 99th percentile or higher for their position in steal percentage, but the Sixers weren’t a top-tier unit anymore. And Rivers acknowledged that reality.

“Well, we need to (create more turnovers), because we don’t like last year — there’s no doubt about it,” he said after a Jan. 25 win over the Pelicans. “We are getting our hands on the ball more, that’s for sure. I thought there was a little thing in the end of the third quarter when Tyrese — he doesn’t normally do it — but he picked the ball up and turned guys full court. And then all of a sudden there’s 14 seconds on the (shot clock) for them to run something. And that’s when you get steals, because they can’t get in their stuff. So it would be great if we could create more turnovers. That’d be great.”

Ultimately, the Sixers couldn’t accomplish that objective in the postseason. Their defensive turnover percentage dropped from 13.6 in the regular season to 12.7, which ranked 14th of the 16 playoff teams.

Some explanations for the decrease are specific to the circumstances. Jimmy Butler never exceeded three turnovers in 17 playoff games last season, which is atypical for a high-usage star. Since he wasn’t fully vaccinated against COVID-19, Thybulle was ineligible for three games in Toronto. Injuries sidelined Embiid for the first two contests of the Heat series, weakening the Sixers’ overall defense and leading the team to use heavy doses of zone.

It certainly wasn’t all fluky, though. Thybulle’s well-known offensive weaknesses contributed to him receiving fewer minutes, which wasn’t shocking. And, coaching a team that hadn’t had much time to drill fundamentals and discover reliable solutions, Rivers sounded reluctant to ramp up the aggression. He’d publicly floated the idea of adjustments against Butler after the Sixers were blown out in Game 5.

“We would love us to run our defense the right way first,” Rivers said the next day. “That always helps in coaching. You’re watching the tape and it’s like man, if we had executed this, maybe we would’ve guarded it better. It’s hard to make a change when you’re not doing the original way right first. And so we have to fix that first, and then we’ll be ready for the second part.”

The Sixers will hope offseason pickups De’Anthony Melton, Danuel House Jr. and P.J. Tucker help with exerting greater pressure and forcing more turnovers. Melton is the rare player in Thybulle’s universe statistically, posting elite steal and block rates for a combo guard (96th and 97th percentile, respectively, per Cleaning the Glass). Both House and Tucker will be glad to pester anyone Rivers puts them on, stars included.

The regular season vs. playoffs turnover disparity was far worse for the Sixers offensively. Again, they ranked 14th of 16. Their offensive turnover percentage rose from 12.9 to 16.0.

On a positive note, Embiid’s passing progress was encouraging despite the occasional regrettable decision. He registered a career-best assist-to-usage ratio and career-low turnover percentage.

“When you get to the league, you’re not going to be perfect,” Embiid said in December. “Even nowadays, I’m going to make mistakes. … I’ve got to make the right plays. If I’m doubled, I should pass it. Here and there, I’m going to make mistakes. The best players in the league with a lot of usage, you’re going to turn the ball over at some point. But as the years went along, I feel like I’ve gotten extremely better. But it’s also because that’s what we work on — whether it’s with my trainer or the team — those types of situations.”

Maxey’s an important part of the Sixers’ turnover picture. He’s been excellent at taking care of the ball — no “for a young player” caveat required. In his first year as a full-time NBA starter, Maxey averaged 4.3 assists and 1.2 turnovers.

Will Maxey play a slightly riskier style in Year 3, making more regular forays into the paint and trying more advanced, tight-window passes? And would the Sixers be fine with that, even if his turnovers increase?

“I’d be OK with it,” Sixers skill development coach Spencer Rivers said last month in a phone interview with NBC Sports Philadelphia. “Obviously I don’t want him to turn the ball over a lot, and I think for the last two years I’ve been OK with his approach just because he’s younger and he’s getting better at making those reads. He’s not perfect at doing that yet. He’s not the best passer right now, but you can tell that he’s getting better slowly over time. And I think the pace he’s been going at has been great.

“I think he can still make more improvements, obviously, getting to the basket and then making that read, but I think in the coming years I’d be more willing to accept some of the turnovers to live with maybe the high(er) output of assists or him creating more opportunities for guys like P.J. Tucker and James and Danuel House — some of these guys that are good three-point shooters.”

Indeed, a failed Maxey-to-Harden connection will likely be a lot easier to stomach than a Hurts pass intended for A.J. Brown landing in Cowboy hands.