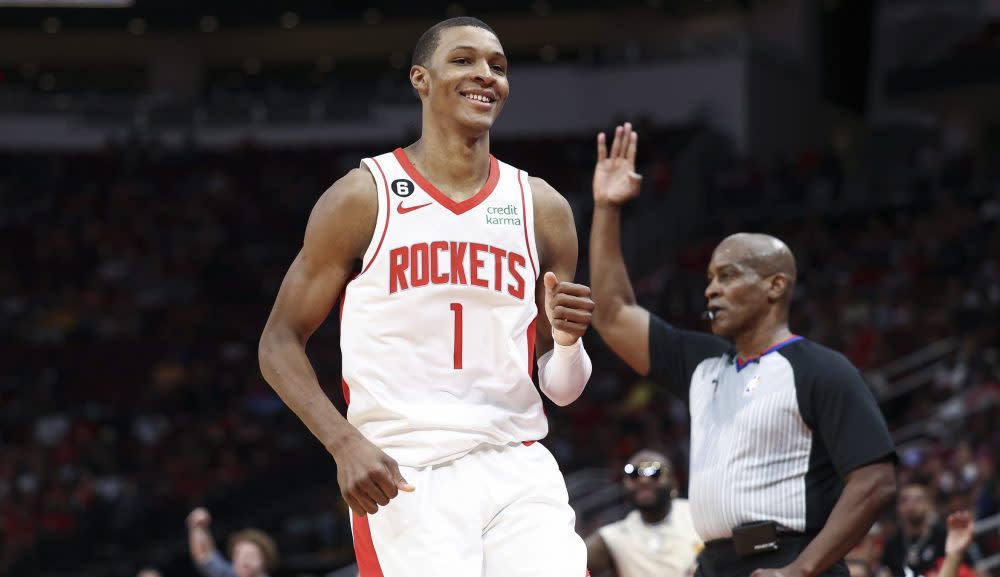 Towards the end of the 2021-22 NBA season, Houston Rockets head coach Stephen Silas decided to rest some of his veterans so that he could genuinely evaluate some of the talents he had on his team.

We all know what guards Jalen Green and Kevin Porter Jr. did to finish the season. Still, another player was able to show the coaching staff and general manager Rafael Stone that he could potentially be an intricate piece to the rebuilding puzzle.

Third-year reserve center Bruno Fernando was ready when his name was called, especially when he was given a significant amount of playing time. Last season with the Rockets, Fernando averaged 15.0 points and 9.3 rebounds when he played 15 minutes or more.

Showcasing some of his skills that made him a early second-round selection in the 2019 NBA draft by Atlanta gave the Rockets an idea of how valuable he could be heading into the 2022-23 NBA season.

“I am a firm believer in taking full advantage of the opportunity,” Fernando said late last season after scoring a career-high 17 points to go along with 10 rebounds.

Fernando, a 24-year-old, 6-foot-10 big man, came to Houston via a February 2022 trade with the Boston Celtics that included Dennis Schroeder and Enes Freedom in exchange for Daniel Theis.

With an expiring contract, he knew it was imperative to showcase the skills and energy he could bring coming off the bench, especially with the Rockets investing their future in young center prospects such as Alperen Sengun and Usman Garuba. He did just that, doing whatever the team needed him to do.

The Rockets showed the feelings were mutual by signing Fernando to a deal worth up to four years and $10.9 million after converting his previous Exhibit 10 contract to a two-way deal just three days ago.

“To be honest with you, I wanted to be a part of this,” Fernando said after the Rockets’ first preseason game versus San Antonio. “I showed it from the time that I came here that I truly wanted to be a part of this. I am excited about what is being built around here, and I felt like this would be the right spot for me. So, I just continued to put in a lot of work and hoped that it would get me somewhere, and it did.”

In Sunday’s win over the Spurs, Fernando had 8 points and 3 rebounds off the bench, and the Rockets were a whopping +18 in his 11 minutes played. Fernando made all three of his shots from the field.

Looking back, Houston may have a former player to thank for how Fernando has integrated himself into the team’s developing culture.

“I learned from Clint that every time you go into a situation, look around and see what is missing, and then ask yourself if you can add that and bring that to the table,” Fernando said in the locker room.

In postgame comments, Rockets coach Stephen Silas elaborated on the intangibles that Fernando brings to the table.

“He is a rim threat when it comes to the roll, offensive rebounding, and he protects the rim,” Silas said. “He is a game changer for us because we have Al-P (Sengun) who is so skilled, but not quite as athletic, and Bruno can come in and be athletic by really rolling hard to the rim… and that opens it up for everybody.”

Houston will be back in action on Friday as they host the Toronto Raptors in their second preseason game at Toyota Center.