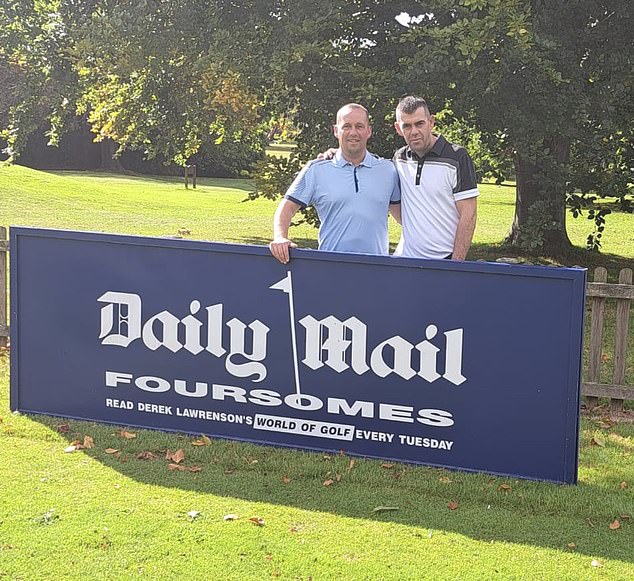 By Cara Sloman For Mailonline

Brothers Clint and Gordon Maxwell are determined to go all the way and bring the Daily Mail Foursomes trophy back to Scotland after storming into the semi-final.

The siblings from Clober, just outside Glasgow, got off to the perfect start at Marriott St Pierre in the world’s largest amateur golf tournament.

They won the battle of the brothers in the last 16 to knock out Andrew and Jonathan Tolman from Brighton & Hove 3&1 before going on to beat Berkhamsted’s Peter Jennings and Nick Hodgins 4&3 in the quarter-finals.

An excited Clint, 41, who is head greenkeeper at Clober where Sandy Lyle is Honorary President, said: ‘We’re going for it now. We’ve got more to come. It’s been tremendous.’

The last men’s team to achieve this was Broughty from Tayside, 21 years ago.

They are not the only Scottish pair through to the semi-finals. Fiona Allison and Linda Jack from Dumfries & County knocked out former England cricket internationals Janet Tedstone and Linda Burnley from Willow Park 4&3 to clinch their spot.

There has only been one previous Scottish winner in the women’s competition and that was Troon Ladies in 1977 and Duddingston in 2017.

A tearful Allison, 49, who hit a fantastic bunker shot on the 15th to within a foot of the pin to help ensure victory said: ‘It makes you emotional when you think you are flying the flag for Scotland. This is a massive achievement. I think the adrenaline keeps you going. There is no room for error in foursomes.’

Burnley, who was a wicketkeeper for Yorkshire and played a one-day international for England praised their opponents, saying: ‘It was a really good match. They just kept punching back.’

The showdown between some of the country’s best club golfers concludes today with the semi-finals and finals being played at the South Wales venue.