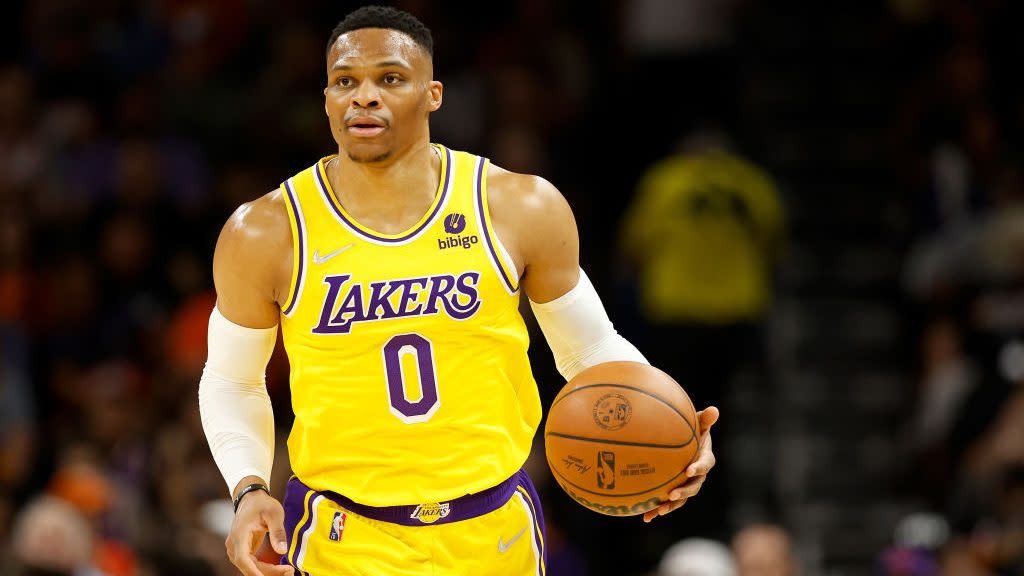 The Lakers are stacked at guard — especially point guard.

And all that ignores the fact LeBron James actually functions as the lead guard in Los Angeles.

Could the Lakers end up bringing Westbrook off the bench?

It was widely discussed around the league last season, and Frank Vogel and his Lakers’ staff reportedly considered it, but only went as far as benching him at the end of a couple of games. New coach Darvin Ham has the green light to do it and the Lakers have talked about it, Jovan Buha and Sam Amick of The Athletic report.

Yet, while the Lakers have been hopeful the Westbrook experiment might be a success this time, sources with knowledge of the situation told The Athletic that the prospect of Westbrook coming off the bench is being strongly considered.

At a minimum, it seems clear Westbrook will have to outplay new addition Patrick Beverley and Schröder if he’s going to retain his starting role.

A player of Westbrook’s stature — MVP, nine-time All-Star, triple-double machine — deserves a fair shot at the starting job heading into training camp. He might even be the presumptive starter unless someone else beats him out — Westbrook and Nunn, with Beverley and Schroder off the bench. However, to stay a starter, Westbrook is going to have to accept a role within Ham’s offense, one where he spends some time in the corner as a shooter, plus he’s going to have to defend every time down the court, things he was not willing to do for Vogel last season.

It’s hard not to watch Westbrook’s volume scoring game the past couple of seasons — where he wants the ball in his hands but is just not efficient enough to be a No. 1 option anymore — and think he would thrive as a sixth man. It wasn’t just fans and the media talking about it, scouts and other team coaches were as well. Westbrook could be in a Jamal Crawford/Lou Williams/Jordan Clarkson role where he is given free rein and a green light against lesser defenders for 15ish minutes a night to do what he wants. He could still close games some nights, depending on matchups, but his primary goal would be to rack up numbers with the second unit and keep the Lakers in games (or extend leads).

It’s also possible a trade for Westbrook becomes more viable during the season (the longer it goes on, the less of his salary a new team would have to pay out of pocket). Amick and Buha confirm what has been said about the Lakers for weeks: They are interested in Bojan Bogdanovic, Clarkson, and Malik Beasley out of Utah, as well as Buddy Hield out of Indiana, but with the Lakers not wanting to take on salary into next season or give up both fist-round picks they can trade, it’s next to impossible to make a deal.

The Lakers are going to start the season with Westbrook. The only questions are will he start or come off the bench, and how well will he accept that new role?

Check out more on the Lakers

Beverley. Now Schroder. Could the Lakers bring Russell Westbrook off the bench? originally appeared on NBCSports.com