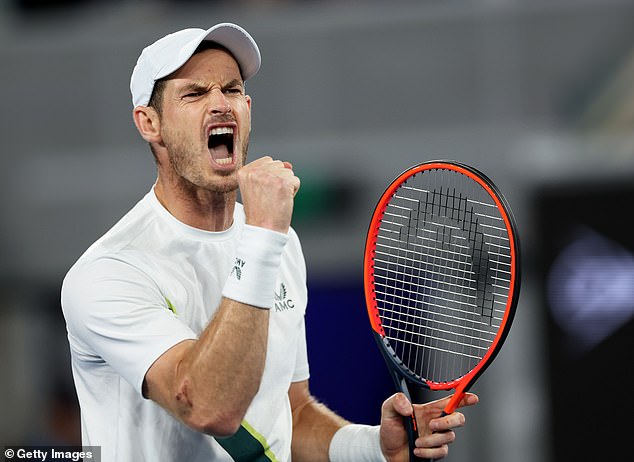 Andy Murray pulled off a scarcely believable break point in the third set against Thanasi Kokkinakis at the Australian Open before sealing one of his greatest comeback victories of his career – in a moment that was pivotal in turning the tide.

The British veteran, facing home favourite Thanasi Kokkinakis in the second-round in Melbourne, was two sets and a break down but rolled back the years and utilised his magnificent defence to secure a break back just when he needed it.

A hugely pumped-up Murray, 35, then cupped and pointed his finger to his ear to the crowd to indicate he wanted them to show their appreciation by being louder – as a frustrated Kokkinakis smashed his racket on the floor in anger.

British star Andy Murray, 35, rolled back the years to light up the Australian Open on Thursday 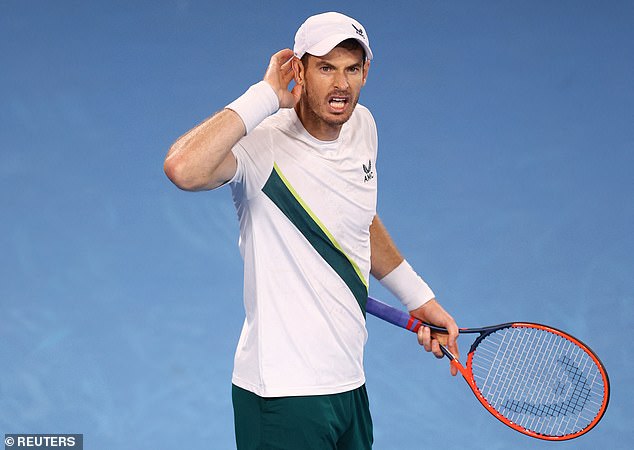 Murray used his magnificent defence to break home favourite, Australian Thanasi Kokkinakis, at the Margaret Court Arena before cupping his ears to the crowd in a pumped-up celebration

After Murray patted a return of serve down the middle, Kokkinakis smashed a forehand down the line which had Murray scrambling, and opened his body up to send another forehand to the opposite side, which Murray somehow kept in.

Kokkinakis, 26, then had three opportunities to put the three-time Grand Slam champion away with a smash but Murray predicted where he was going each time, and his third return pushed Kokkinakis back from the net to the baseline.

When Murray returned his baseball-style shot, a clearly fed-up Kokkinakis – the reigning men’s doubles champion along with compatriot Nick Kyrgios – fired a forehand into the net and threw his racket to the ground in disgust and disbelief. 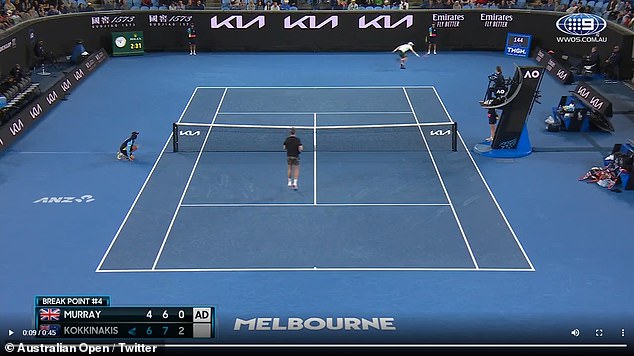 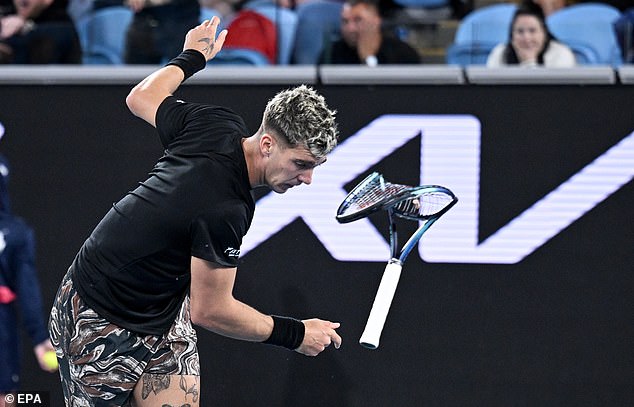 At five hours and 45 minutes, it was the longest match of Murray’s whole career and the third latest finish to a tennis match ever.

Twice-Wimbledon champion Murray beat 13th seed Matteo Berrettini in a thrilling five-set, nearly five-hour thriller to reach the second round, while Kokkinakis eased past veteran Fabio Fognini in the first round.

Murray left the Australian Open in tears four years ago thinking upcoming hip surgery would lead to his retirement.

But victory over Berrettini with a metal hip ranked among the greatest triumphs of his career and will hope to upset Kokkinakis by coming back from two sets down to win on Thursday.

See also  Emma Raducanu's US Open Exit Will Make It Easier For Her To Develop, Says Legend Virginia Wade

One Twitter user said: ‘What a total legend!’ while one simply added: ‘Insane!!!!’.

A third posted: ‘Sir Andy says it ain’t over till it’s over.’

One continued: ‘Win or lose today, what a sportsman, what an athlete, what a career!!’.

Another tweeted: ‘Point of the year for me already……’.

A sixth concluded: ‘Unreal. Gonna show this to my 10 year old as an example of never knowing when you’re beat and always giving your best. Incredible.’

Asked how he had managed to come through the longest match of his career, Murray told Eurosport: ‘I don’t know. It was unbelievable that I managed turn that around. Thanasi was serving unbelievably, hitting his forehand huge and I don’t know how I managed to get through it.

‘I did start playing better as the match went on – and yes, I have a big heart.’

He added: ‘I think now I am outright the (winner of) most matches coming back from two sets to love down, so I have done it before, I have experience of it and I just rely on that experience and that drive and that fight, and my love of the game and competing and my respect for this event and the competition.

Murray was quick to thank the crowd for staying until its thrilling – and very late – conclusion.

He said: ‘It’s ridiculously late, you didn’t need to do that, but it really helps me and Thanasi in a situation like that when we have all of you creating an amazing atmosphere for us, so we appreciate that.

‘Everyone, including me, I think we should all get off to bed now.’